Celebrating the 10th anniversary of the world’s first cancer vaccine 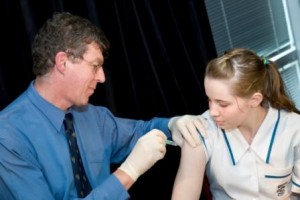 Ten years ago, on the 29th August 2006, the very first Human Papillomavirus (HPV) vaccine was administered in Australia.

HPV vaccines protect against 70% of cervical cancers in women and 90% of all HPV-related cancers in men, which include certain types of head and neck cancers and various cancers of the genital tract.

To date, over 187 million doses of HPV vaccines have been administered across more than 130 different countries. This has helped to halve the number of new cases of cervical cancer in women.

In 1999 the Australian Cancer Research Foundation (ACRF), awarded a $1 million grant for vital equipment that would help advance Professor Ian Frazer’s research into HPV and its role in causing cervical cancer. This funding enabled Professor Frazer’s research team at the Diamantina Institute in Queensland to achieve a breakthrough discovery and attract more funding to develop the HPV vaccine.

Over the years this has enabled research teams like Professor Ian Frazer’s at the Diamantina Institute to attract the world’s best researchers to Australia and allowed them to explore novel and potentially game changing ideas. Witnessing these types of life-saving outcomes is exactly the sort of thing we hope for when we award funding.”

Australia was one of the first countries to approve the use of the vaccine for Australian boys via school-based programs, with all students aged 12-13 now receiving the vaccine under the National Immunisation Program.

“Being parents to two young boys aged nine and four, my wife and I were so heartened to read that our boys were to receive the vaccine. We thought it was such wonderful news that our kids and many others would be given such a great start in life, and hopefully be free from fear of this horrible disease.” Norman Elias, ACRF fundraiser.

Professor Frazer says, “Observations from over the past ten years are that the HPV vaccines, if delivered effectively to the majority of 10-12 year old girls in the developing world from today forward, should lead to the global elimination of new cervical and other HPV associated cancers by 2050.”

Professor Brown concludes, “It takes an immense amount of collaboration on a global scale to achieve feats such as this but it’s the people that support ACRF and foundations like it that fuel this type of positive change in the world.”