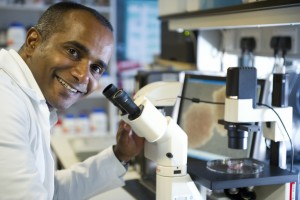 Cancer researchers at Peter MacCallum Cancer Centre in Melbourne have found a new lead that could fast-track the development of a more targeted and effective treatment for MLL Translocated Leukaemia.

More than 80% of infants diagnosed with either Acute Myeloid Leukaemia (AML) or Acute Lymphoblastic Leukaemia (ALL), and up to 10% of diagnosed adults, have a sub-type known as MLL Translocated Leukaemia.

Prognosis for MLL Translocated Leukaemia is particularly poor with only 40- 50% of diagnosed infants likely to survive, and the five-year survival rates in older adults remaining at less than 20%.

Peter Mac’s Professor Mark Dawson has studied Acute Leukaemia and this particular sub-type for a decade. He says the latest findings provide a step towards next-generation therapy for the disease, for which treatment has changed very little since the 1970s.

“Every other disease that I’ve treated in my time as a haematologist has had one if not many, new drugs come along to improve treatment but this has not been the case for AML,” Professor Dawson said.

“This is a disease where patients affected are often young and fit when first diagnosed but do not respond to conventional therapy.”

Research by Professor Dawson’s team along with international collaborators has – for the first time – explained the role played by two proteins (BRD4 and DOT1L) which are known to be key regulators of MLL Translocated Leukaemia.

His research identified a previously unknown cooperation between these proteins, showing how they depend on each other to progress the disease.

Drugs which target both of these proteins are now in separate clinical trials as potential leukaemia treatments. Professor Dawson’s research suggests a combination therapy involving drugs that target both proteins at the same time may be an effective strategy against the disease.

Professor Dawson’s findings explaining the interdependence of BRD4 and DOT1L in MLL Leukaemia has been published in the journal Nature Structural & Molecular Biology.

“We’ve always known that these leukaemias needed these regulators but what we didn’t know was why, and we didn’t know that they spoke to each other to drive the disease,” Professor Dawson said.

“The good news is we don’t have to develop new drugs in light of this research because they are already here and in clinical trials,” Professor Dawson said.

The original article was published on Peter Mac’s website. The image of Professor Dawson was provided courtesy of Peter Mac.