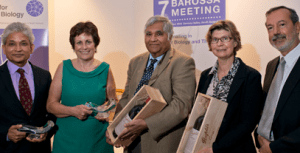 The Clifford Prize for Cancer Research was presented to Professor Inder Verma and Professor Jane Visvader at Seventh Barossa Meeting on Cell Signalling in Cancer Biology and Therapy.

The bi-annual prize is presented by the Centre for Cancer Biology (CCB), South Australia, for outstanding international achievement in cancer research.

Professor Verma is an American Cancer Society Professor of Molecular Biology in the Laboratory of Genetics at the Salk Institute for Biological Studies. He has been responsible for many major discoveries in cancer biology over the past four decades, ranging from basic discoveries regarding transcription factors involved in cancer, laying the basis for modern molecular biology by developing the cDNA synthesis procedure using reverse transcriptase, to development of viral-based vectors for gene therapy approaches to various genetic diseases, including cancers.

Professor Verma and co-workers have ingeniously employed specific methods of mouse genetics to reveal the roles of many specific oncogenes / transcription factors in normal cellular growth, differentiation and development.

Professor Visvader is a Fellow of the Australian Academy of Science. She and her team have made major contributions to the understanding of breast cancer by isolating mammary stem cells, defining master regulators of mammary gland development and identifying genetic lesions that drive oncogenesis. Her landmark discoveries have revealed master regulators that orchestrate cell fate decisions in the mammary gland, providing an indispensable framework for understanding mammary lineage commitment and differentiation, and a basis for understanding origins of breast cancer.

The Clifford Prize for Cancer Research represents an appreciation by Australian scientists for discoveries that have combined outstanding science with significant clinical relevance.

The ACRF Cancer Genomics Facility was established at the CCB in 2009, with the assistance of a $3.5m grant from the ACRF.