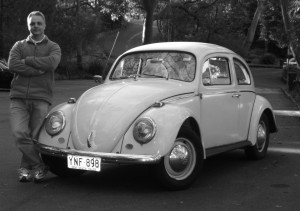 Determined to raise funds for cancer research and to help rid future generations of this disease, Norman Elias is getting ready to commence his eagerly awaited “Bug Off Cancer Drive” – a solo motor journey across Australia’s South-east coast in his beloved 1965 Volkswagen Beetle.

Norman’s journey will begin on 29 July from Sydney, and he plans to cover 3800km in one week, driving through iconic locations such as Broken Hill, Adelaide, the Great Ocean Road, and through snowy country to Canberra.

Norman has lost both parents and other relatives to cancer, and with the support of family and friends, decided he wanted to do his bit to help rid the world of cancer.

“I, along with many others am raising funds for the continued research to fight and find a cure for cancer, and hopefully prevent this hideous disease that affects so many people across our community.”

Norman hopes to raise $6000 for ACRF, and having raised $500 already we are certain he and his supporters are up for the challenge.

“I will be doing it at my own expense and am asking for your assistance, no matter how much, to donate to this cause…” says Norman.

He will be the sole driver on the journey, and doubling-up as the mechanic for any needed repairs along the way.

Although its a vintage, we are sure Norman’s 1960’s “VW Buggy” is up for the challenge also – perhaps even a lucky charm, considering the great developments for cancer research around that era.

The 1960’s saw advances such as the use of high-dose radiation in curing childhood leukaemia, the identification of the first cancer-causing gene (oncogene), and researchers using bone marrow transplantation to treat cancer.

All this recent research has been made possible through the ACRF grants program and the support of wonderful donors, and community members such as Norman.

So it’s time to gear up and rally behind our latest fundraiser, Norman Elias, and his adventurous event in support of the Australian Cancer Research Foundation. To support Norman and his fundraising visit the Bug Off Cancer fundraising page.