Brent in endurance competition for ACRF 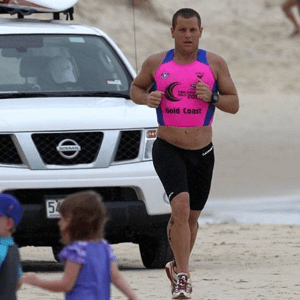 I’ve been involved in Surf Life Saving since age eight and played sport my whole life so it was a natural to get involved in Coolangatta Gold, the ultimate endurance race in surf sports. I have competed numerous times, three years taking out the 30-39 age group, and runner-up twice. This year’s Coolangatta Gold for me will be unique in two ways. I plan to push the boundaries a little further by taking part in both the 21 km course and 41.8 km course, and I’ll be fundraising for ACRF. My goal is to raise $10,000 and generous donations have already pushed that goal over the half-way mark.

I have known many people over the years who have been affected by cancer; most recently a good mate’s daughter had a tough fight with cancer. Myself and others felt helpless, so I had been wondering just how I could support my friend and others. I believe that kind of support is best represented by ACRF and their ongoing cancer research. Research not only assists in treatment advances; it will ultimately result in a cure for all cancers.

I’m sure there are people who think it’s crazy to take on two races in the same weekend and in reality that is probably true. Thankfully, my wife, family, friends, coaches and colleagues have been truly supportive, which helps me to forget about the cold mornings paddling in winter, being tired and having sore muscles. I don’t believe anyone has done both courses on the same weekend so this is my chance of pushing myself to achieve it.

My two-year-old daughter won’t remember her Dad’s efforts in this year’s competition, but I do hope she has the opportunity to remember a long lifetime – free of cancer.