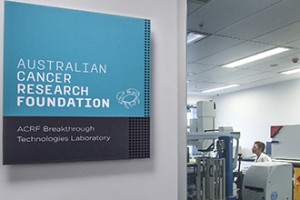 With support from the Australian Cancer Research Foundation, the Walter and Eliza Hall Institute has today unveiled the $2.5 million ACRF Breakthrough Technologies Laboratory which will help researchers uncover new insights into how cancer develops, and how it can be more effectively treated.

This is the third ACRF grant awarded to Walter & Eliza Hall Institute of Medical Research. These grants were awarded 2001, 2010 and 2014 with a combined value of $5.5 million to help researchers make breakthroughs in genomics, as well as breast, lymphoma and lung cancers.

The facility will be used by researchers from WEHI and the Victorian Comprehensive Cancer Centre (VCCC) partners to enhance and accelerate research into many of Australia’s most common, and most deadly, cancers including cancers of the blood (leukaemia, lymphoma), breast, ovary, lung and bowel.

The director of the WEHI, Professor Doug Hilton, said the ACRF Breakthrough Technologies Laboratory would provide an enormous boost to Australia’s cancer research efforts. “It has become clear that technologies such as CRISPR/Cas9 can accelerate new breakthroughs in understanding cancer and developing new treatments.”

“The generosity of ACRF and its donors has allowed us to equip our research teams with precisely the tools they need to advance their research,” Professor Hilton said.

Mr Tom Dery, Chairman of the ACRF Board said “We are proud to enable the ground-breaking research conducted at the ACRF Breakthrough Technologies Laboratory. The facility will help to accelerate new treatments for people with cancer in Australia and worldwide.”

The contributions Australian researchers are making to improve the prevention, diagnosis and treatment of cancer are very significant. “More than 14 million people around the world were diagnosed with cancer last year, including more than 125,000 Australians,” Mr Dery said.

“The strength of the VCCC lies in the close ties it fosters between the laboratory-based, clinical and other researchers in its partner organisations. This means that discoveries made in the ACRF Breakthrough Technologies Laboratory will be translated into new treatments for cancer as rapidly in Melbourne as anywhere in the world,” Professor Bishop said.

The original article was published on the Walter and Eliza Hall Institute website, click here to view.