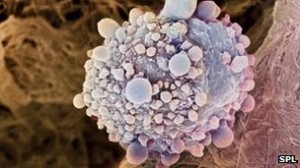 A new study has found that a particular gene is being switched off in the cancerous cells of up to 15% of pancreatic cancers.

New drugs are already being tested to turn the gene back on, thereby working to stop the spread of cancer.

Pancreatic cancer is one of the most aggressive and lethal types of cancer, and this discovery paves the way towards a new class of drugs which target this gene, thus treating some types of pancreatic cancer much more effectively.

The study was published in the journal ‘Nature’ following research which revealed that when the gene Usp9x was ‘switched off’ in mice, cells started to grow out of control. It has been called a ‘brake gene’ because it seems to have a key role in natural cell death.

Prof David Tuveson, from the Cancer Research UK Cambridge Research Institute, said: “We suspected that the fault wasn’t in the genetic code at all, but in the chemical tags on the surface of the DNA that switch genes on and off, and by running more lab tests we were able to confirm this.

“Drugs which strip away these tags are already showing promise in lung cancer and this study suggests they could also be effective.”

Dr Julie Sharp, Cancer Research UK’s senior science information manager has said: “These results raise the possibility that a class of promising new cancer drugs may be effective at treating some pancreatic cancers.

ACRF is delighted to see that a number of research centres we’ve funded are affiliates of this pancreatic cancer research, including the Garvan Institute of Medical Research, and the Institute for Molecular Bioscience at the University of Queensland.

Researchers have already started testing drugs in the search for potential gene-triggers, which will activate the silent gene and therefore work to stop the spread of cancerous cells.