Adelaide scientists are well positioned to further cement their position as national and international leaders in cancer research, following today’s opening of the Adelaide Proteomics Centre at the University of Adelaide.

The world-class $3million Proteomics Centre in the University’s School of Molecular and Biomedical Science – the only one of its kind in South Australia – was opened by Jennifer Rankine, Parliamentary Secretary to South Australian Premier, Mike Rann. 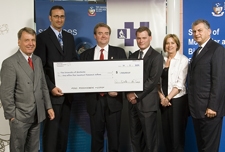 Dr Peter Hoffman, an internationally-renowned Proteomics specialist, has been recruited to Adelaide to direct the centre.

The Adelaide Proteomics Centre houses state-of-the-art proteomics equipment, including a MALDI TOF/TOF mass spectrometer, the most advanced instrument of its kind in Australia. The technology will enable scientists at the School of Molecular and Biomedical Science and the Hanson Institute to significantly increase their productivity in cancer research, according to Adelaide University’s Professor of Immunology, Professor Shaun McColl.

Proteomics is a powerful tool in the fight against cancer as well as a range of other diseases, where research requires the observation of proteins at a molecular level. It is the next step on from mapping the human genome – the large scale study of gene expression at protein level.

“The development of this facility is already having an important influence on the interactions between cancer researchers in Adelaide and is enabling state-of-the-art research that would not have otherwise been possible,” said Professor McColl, who led the grant-winning team from the University of Adelaide and the Hanson Institute.

These collaborations include research on the molecular basis of diverse cancers such as leukaemias, breast, colon and prostate cancer.

“What is most exciting is that this is the most sophisticated equipment in Australia. Cancer researchers in Adelaide need direct access to this kind of expertise and equipment in order to maintain and extend their leading edge research,” Professor McColl said.

“We commend the ACRF’s commitment to investing in leading-edge cancer research facilities that will help our researchers to make cancer a thing of the past. Without the $1.5million grant, this facility wouldn’t have been feasible.”

Australian Cancer Research Foundation Chairman, Tom Dery said one of the aims of the ACRF is to redress the current deficiencies in the provision of capital grants and funding for the establishment of research infrastructure and national facilities.

The Australian Cancer Research Foundation – now in its 21st year of operation – has raised in excess of $40 million to support excellence in Australian research initiatives, and will award over $10million worth of grants in 2006 alone.

Individual ACRF grants exceed $1 million – a sum not available from other private sources in Australia – and continue to significantly contribute to drastic breakthroughs in the fight against cancer. A $1.1million grant from ACRF in 1999 helped 2006 Australian of the Year Professor Ian Frazer kick-start his quest to develop a vaccine to prevent and treat cervical cancer.

For more information on the $1.5million ACRF grant to the University of Adelaide, click here.