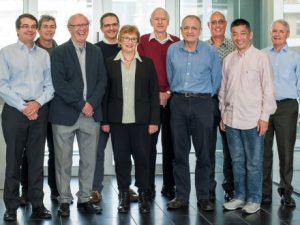 A new anti-cancer drug with the power to ‘melt away’ certain advanced forms of chronic lymphocytic leukaemia (CLL) has been granted approval by the Australian Therapeutic Goods Administration (TGA), following equivalent approvals in the United States and European Union.

CLL is the most common type of leukaemia in Australia, with 1300 people diagnosed each year.

Venetoclax, to be marketed as VENCLEXTA™, has just been approved for Australian patients with relapsed or refractory CLL with 17p deletion, a mutation that makes the disease relatively resistant to standard treatment options, as well as for patients with relapsed or refractory CLL for whom no other treatment options are available.

“The fact that Australians with hard-to-treat chronic lymphocytic leukaemia can now benefit from a drug like venetoclax demonstrates how critically important medical research is to the health of our community,” Professor Hilton said.

Professor Hilton applauded the team effort by Australian researchers and their international partners that preceded the approval.

“TGA approval of venetoclax is a major milestone in a journey spanning decades of powerful and innovative research by teams of leading scientists, clinicians and entrepreneurs, including more than one hundred researchers at Melbourne’s Walter and Eliza Hall Institute of Medical Research,” Professor Hilton said.

The timeline of discovery began at the Walter and Eliza Hall Institute in 1988, with the identification of BCL-2, a protein enabling cancer cells to survive.

Professor Hilton said scientists worldwide had subsequently been trying to find a way to ‘hit’ BCL-2, in order to stop cancer cell survival.

“Like a lethal arrow, venetoclax flies straight to the heart of BCL-2,” Professor Hilton said.

Venetoclax was discovered and developed with scientists from US pharmaceutical companies AbbVie and Genentech, as part of an international collaboration with the Walter and Eliza Hall Institute.

The first clinical trials for venetoclax started in Melbourne at the Institute’s Victorian Comprehensive Cancer Centre partners The Royal Melbourne Hospital and Peter MacCallum Cancer Centre and were led by Australian haematologists.

Professor Andrew Roberts, a clinical haematologist at The Royal Melbourne Hospital and cancer researcher at the Walter and Eliza Hall Institute and the University of Melbourne, said venetoclax was being combined now with other approved drugs and undergoing phase 2 and phase 3 clinical trials in other blood cancers.

“The hope is that venetoclax, potentially in combination with other approved drugs, could benefit more patients including those with other hard-to-treat types of blood cancer,” Professor Roberts said.

“Ongoing research suggests that this drug will be very active against other cancers, so this milestone may just be the beginning,” he said.

Below is a recent video of Professor Doug Hilton at ACRF’s Chariman’s Dinner. Here he talks about his experiences as a cancer researcher over the years. He discusses how some of the significant breakthroughs celebrated today, such as venetoclax, have been the result of an incredible amount of support provided by the community of ACRF supporters.