Ashley gets ready for the ride of his life! 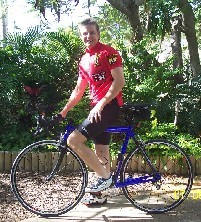 Hats off to Ashley Williams who in December 2005 will cycle from his home in Townsville to Yulara (Ayers Rock) to raise funds for the Australian Cancer Research Foundation (ACRF).

Ashley’s journey will span 17 days and 2566kms, taking him through towns like Mingela, Homestead, Hughenden, Julia Creek, Cloncurry, Mt Isa, Camooweal, Devils Marbles and Alice Springs. And it’ll be well worth the ride, according to the Qantas employee, who last year lost his father Sam after a long and courageous battle with lung cancer.

“I want to bring awareness to the cause of cancer research on a much broader scale,” says Ashley. “This is also a personal tribute to the memory of my dad.”

Ashley is aiming to raise a minimum of $2 per kilometre he rides, although he is confident of raising much more. Already his support crew (consisting of wife Sian and family) has secured the support of the Ayers Rock Resort who will provide accommodation in Alice Springs and Ayers Rock and assistance with fundraising along the way.

If you would like to make a donation to help Ashley reach his target, please email Ashley at sian_ash@hotmail.com or call (07) 4789 1121.

And watch this space for updates on Ashley’s fundraising efforts!

Now in its 21st year of operation, the Australian Cancer Research Foundation has raised in excess of $36 million to support excellence in Australian research initiatives, and awarded grants totaling $6.3 million in just the last two years.

Individual ACRF grants exceed $1 million – a sum not available from other private sources in Australia – and continue to significantly contribute to drastic breakthroughs in the fight against cancer.