Ashley completes the ride of his life!

In December 2005, Ashley Williams, supported by his manager and wife, Sian, cycled from his home in Townsville to Yulara in the Red Centre of Australia to raise funds for the ACRF. The ride was a personal tribute to his late father Sam, who lost his battle with lung cancer in 2004.

Ashley’s incredible journey spanned 17 days and 2566kms and with the help of many sponsors and individual supporters, he well exceeded his target of $2 per km he rode.

Ashley and Sian received a warm welcome at all of their pit stops, with the hospitality in each town varying from complimentary accommodation and meals to BBQ raffles, auctions and bingo nights to help raise funds.

“We were completely overwhelmed by the kindness of strangers,” said Sian. 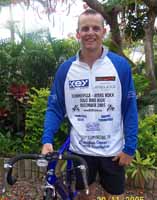 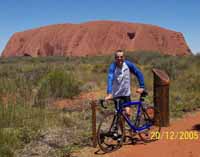 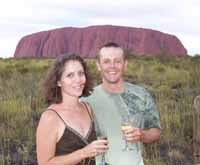 “There were people like Barry Carrington, the local butcher in Richmond, who realised that we were raising money only after we had visited his shop. So he tracked us down to where we staying to give us a donation.”

During the trek, a typical day for Ashley began at 4am. Sian departed at 6am, usually meeting her husband 50-70km down the track for breakfast, a chat and to capture some footage for their video diary. Ashley would set off again soon after, with Sian meeting him every 20km until they reached their destination.

On average, Ashley completed 140km per day, although he did notch up a 263km ride from Camooweal to Barkly Homestead in one day! Ashley spent nine hours, 50 minutes on the bike that day.

“The original plan was to do that leg in two days with a bush camp stop,” says Sian. “But by doing it in one day we made the next day a rest day.”