The two brothers are setting off on a marathon motorbike ride beginning in early March from Cape Town South Africa and then travelling for six months covering 40,000 km, across four continents, through 27 countries.

Brothers, Dean, 35, and Paul, 37, Martinello, who go by the fundraiser name of ‘Donkey And The Mule’, will ride two motorcycles up the west coast of Africa and across the Sahara. From there, the duo plan to head east across the Suez into the Middle East, Turkey and then on to Caucuses. 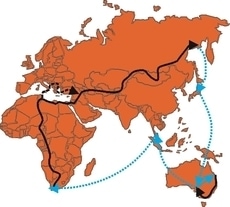 After that it is over the roof of the world – through Pamir’s into Mongolia and finally to the east coast of Russia hopefully ending at Magadan in September.

What else can you say but “Wow”.

When asked about their motivations for the trip Dean Martinello said that he and Paul would be riding in honor of their father.

“Dad, died in a motorbike accident in 2008, and he had often talked about doing such a marathon ride. We decided to complete it for him as we know first hand you do not live forever,” he said

“We are very close brothers and have done a little bit of motorbike riding around Australia but nothing on this scale.

“Originally it was going to be on a lot smaller scale, perhaps just through Indonesia, but my brother Paul wanted to go through Africa so it grew and grew from there.”

Martinello admitted a lot of preparation had gone into the marathon ride.

“We have been planning it for about 11 months now and recently did an eight week course in French as we go through a lot of French speaking countries along the way. We also speak some Italian and plan to take some Russian language books with us as well,” he said.

“The hardest thing of all has been organizing all the visas we are going to need along the way. That is not such an easy process as it sounds.”

Martinello said the journey would be self-financed and that the two brothers had put their “life savings” into the venture.

“We are being sponsored by a lot of good people though, particularly when it comes to goods and services,” he said.

“It is great to be doing it to raise money for the Australian Cancer Research Foundation as we personally know a lot of people affected by cancer, including our stepfather. I checked out various organisations and was very impressed by the Foundation’s website.”

The ‘Donkey & the Mule’ are planning ‘Going Away Drinks’ on Sunday 21 February at the Edinburgh Castle Hotel Currie St, Adelaide, in the beer garden from 2pm.

Supportive management at the hotel will donate food platters for the afternoon, along with some great raffle prizes to aid in the fundraising. All supporters are welcome.

Dean Martinello said he would send regular updates to the Donkey & the Mule website with an accompanying travelogue and that they would start their marathon on 2 March.

Best of luck for the big trip guys, thanks so very much for your support!

To read all about this marvelous adventure or to support Dean and Paul visit the Donkey & the Mule website.