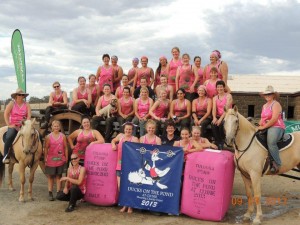 After more than a year of planning, fundraising, and physical training, Sam Westcott and Bec Flynn, and their team of 35 female shearers – the Ducks on the Pond – have reached their fundraising peak with a most generous donation of over $30,000 to the Australian Cancer Research Foundation!

“Ducks on the Pond” was a term traditionally used by male shearers when they saw a lady approaching the workmen’s shed. It was a warning for the gents to clean up their language and their appearance.

So when Sam and Bec devised their unique fundraising idea – they thought it would be only too appropriate to call their all-female event “Ducks on the Pond”. They wanted to show how times have changed, highlighting the important role of women in the wool harvesting industry.

“I said to Sam, you know, wouldn’t it be good to have a shed full of girls. And then we both sort of said, well, there’s only one way to do that and that’s do it for charity,” said Bec.

Not only had both Sam and Bec been touched by cancer, but the owner of this historical Clunie Woolshed (where the event took place), and prize winning shearer Jo Kumeroa also had personal reasons for supporting the Australian Cancer Research Foundation through this event.

The ‘Ducks on the Pond’ shearing event suddenly became very close to many people’s hearts.

The event saw over 1,000 people come from all over the countryside to see the girls in action – working a full day to shear 1,200 small-to-medium Merino ewes. The ladies most generously donated their days’ wage to the ACRF, and held a number of fundraising initiatives throughout the day.

Shearing one of the highest numbers of sheep for the day was Jo Kumeroa (mentioned above); an inspirational achievement given she is currently being treated with advanced cervical cancer.

Jo said to Sam, “It’s people like you who just makes our world go around. Thank you so much.”

“I’m actually doing a lot better than they anticipated, but I think that’s just the rural environments. I’ve just got that mind over matter and we’re a lot stronger than they think,” she said.

The success of the event has motivated Sam and Bec to plan for the next big event.

“Look at the amazing support that we’ve had here,” said Bec. “It’s just fantastic, so I would like to do it again.”

We are so grateful to this team of women for helping us bring cancer research dreams ever closer.