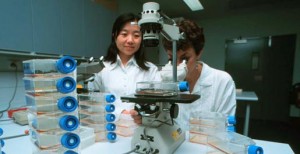 Two Australian research teams have made exciting progress into leukaemia treatments, raising hope for patients around the world suffering from the blood disease.

In a study led by the South Australian Health and Medical Research Institute (SAHMRI) and the University of Adelaide’s Centre for Personalised Cancer Medicine, researchers are testing a promising new approach to killing off leukaemia cancer cells.

They have found that cancer cells decide whether to live or die after a short period of intense exposure to a targeted therapy, reducing current treatment time, leading to reduced side effects in patients.

“This discovery is paradigm shifting,” says Professor Deborah White, Director, Cancer Research with SAHMRI– who just last year accepted an ACRF grant of $1.8 million for the cutting-edge research being conducted at SAHMRI. “Our findings are not just applicable to chronic myeloid leukaemia (CML) therapy, but to all targeted cancer treatments.

“In our research, we’re looking for methods that will result in the cancer cell killing itself. This would provide an improved treatment and reduce the risk of cancer relapse.”

In addition to the discovery by SAHMRI, a global phase III clinical trial has shown a new drug, called ibrutinib, is giving people with advanced leukaemia a ten-fold improved chance of going into remission, with long term survival, compared to the best current standard treatment.

The trial, involving 391 patients with advanced chronic lymphocytic leukaemia (CLL) was conducted in liaison with Peter MacCallum – a Melbourne-based cancer facility which has also received significant funding from the ACRF. They found that after one year, overall survival on ibrutinib was 90%, compared to 81% on the current available treatment called ofatumumab.

“The comparable benefit of ibrutinib was so clear in the data that most patients who were taking ofatumumab switched over to the newer therapy during the trial once their disease progressed, greatly improving their chances of longer-term survival,” Said Dr Con Tam from the Peter MacCallum Cancer Centre.

Applications for Ibrutinib to be included in the Therapeutic Goods Administration and Pharmaceutical Benefits Scheme in Australia are currently underway.

For more information on the discovery by SAHMRI, click here.

For more information on the Ibrutinib trial, please click here.[/vc_column_text][/vc_column][/vc_row]