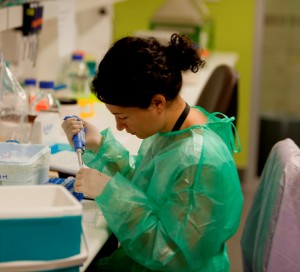 One of the first new melanoma treatments to be released in over a decade could double the average survival time for melanoma patients.

The drug, Vemurafenib, was approved by regulators in the United States and Australia last year after studies showed that in a significant number of patients with advanced melanoma, the cancers either stopped growing or shrank after receiving the treatment.

The latest research now shows that in many cases, treatment with Vemurafenib has doubled cancer patients’ survival period from 6-10 months to approximately 16 months.

Researchers involved in this cancer research study said the findings “provide critical information on long-term overall survival” as a result of the drug.

Some of Australia’s leading cancer research institutes were involved in this study, including the Peter MacCallum Cancer Centre and the Westmead Institute for Cancer Research. Both of these research facilities have been awarded significant funding from the Australian Cancer Research Foundation (ACRF), totalling over $10.5 million.