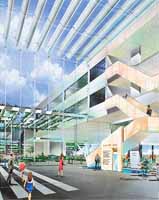 The Australia Cancer Research Foundation (ACRF) has announced a $1million grant to fund a specialised Cancer Prevention Research Facility at the Flinders Medical Centre, within the proposed new Flinders Centre for Innovation in Cancer (FCIC).

The grant (announced on March 10) was awarded following a Flinders University proposal focused on innovative research that seeks to target precancerous cells and treat them, well before cancer takes hold.

“This research will assess the preventative impact of nutritional and lifestyle factors, as well as developing methods of genetic and molecular targeting for new treatments,” said David Brettell, ACRF Chief Executive.

FCIC Director of Development, Flinders University’s Professor Graeme Young, said that the new centre would provide the people of South Australia with a facility unlike any other in Australia.

Professor Graeme Young commended the Australia Cancer Research Foundation’s leadership for investing much need funds for cancer prevention. Fundraising for the FCIC commenced in March 2005 and with this recent boost one third of the $15.5 million target has been reached, thanks to support from the State Government, ACRF and the generosity of many South Australians.

“As a nation we spend approximately $4 billion on the end stages of the disease but a tiny fraction of this – as little 10% – on cancer prevention,” Professor Young said.

“Cancer takes time to develop, it doesn’t happen overnight. We can prevent or circumvent the burden of cancer by focusing our research energies into what we know of pre-cancerous lesions and their development.”

Professor Young’s team at Flinders is focusing its cancer prevention energies on bowel, oesophagus, colon and breast cancer as well as nutritional and environmental preventative strategies.

“We know that if polyps in the bowel are detected and eradicated, we eradicate bowel cancer; if we treat and monitor Barrett’s oesophagus successfully we can eradicate one type of oesophageal cancer,” he said.

“We have a researcher who has discovered one of the key agents involved with breast and colorectal cancers on a cellular level, while other researchers are working on nutritional interventions that will prevent cancer.

“We are even looking at techniques that use low-dose radiation to trigger protective mechanisms in the body and to find ways to harness these mechanisms.”

The ACRF’s $1million grant to the Flinders Centre for Innovation in Cancer is one of five grants awarded nationally this year, and the second major grant awarded by the Foundation to South Australia researchers. The first funded the Adelaide Proteomics Centre at the University of Adelaide, which was officially opened late last month.

ACRF CEO, David Brettell said the Australian Cancer Research Foundation was proud to be at the forefront of funding cancer research, particularly when real breakthroughs in prevention are achieved, like Foundation-funded Australian of the Year, Dr Ian Frazer’s cervical cancer vaccine.

The Australian Cancer Research Foundation, which was established in 1984 by the late Sir Peter Abeles, provides $1 million+ grants nationwide each year to fund much needed facilities and equipment to assist Australian researchers to remain at the forefront of cancer research. In 2006 it will provide a record $10million to fund world-leading cancer research projects.