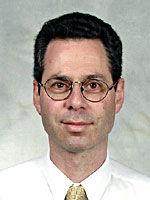 ACRF Medical Research Advisory Committee member Professor Geoff Lindeman is at the head of a research team that has moved one step closer to understanding the genesis of breast cancer.

It opens the possibility that complex organs, such as lungs, intestines and breasts, could be grown for humans. It is also the first time a complex organ – other than the skin – has been grown from a single stem cell, prompting eminent WEHI cell biologist Doug Hilton to hail it “possibly the most significant medical research advance to come out of Melbourne in the past decade”.

As well as helping scientists to understand the development of other organs, the project has important ramifications for cancer research. Scientists will be able to investigate how gene mutations occur, disrupting normal mammary development and eventually causing breast cancer.

All cells carry distinctive combinations of marker proteins on their surfaces. The key to identifying stem cells is to isolate very low-abundance cells that feature some unique combination of markers – the molecular “fingerprint” of a stem cell. The researchers used monoclonal antibodies to identify a sub-set of rare cells exclusive to the developing mammary gland of a pubescent mouse. Then they injected the cells into fatty tissues beneath the skin of female mice.