James and Kirsty have their eyes on the finish line 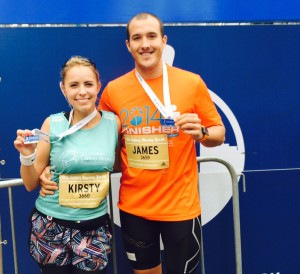 For us, this year is about not letting anything come between us and our dreams – this was the advice my Dad, Mick always gave me.”

This September, James Robson and fiancé Kirsty Donovan will be heading to Europe to run in the Berlin Marathon.

James has been a dedicated ACRF supporter for many years. “While my Dad was receiving chemotherapy treatment back in the UK, I felt like there wasn’t a lot I could do from 12,000 miles away, so I decided to raise as much money as possible to help eradicate this disease.”

“For years I ran in his honour. I ran Iron Man challenges, half marathons and more; running to prevent the sadness, raising money to give every step more meaning in the hopes that Dad might survive his cancer.”

“After three long years of fighting brain tumours, Dad lost his battle with the disease and passed away. I was on a plane home to him as soon as I received the phone call and was able to make it in time to say goodbye. It will be almost a year but it still feels like yesterday.”

“Now I am running in his memory. The ACRF is very close to our hearts and running to raise funds is a way for us to take on a personal challenge at the same time as hitting back at cancer.”

With the help of generous family and friends the couple have raised an astounding $25,000.

James and Kirsty continually strive to move onwards and upwards. With each event they participate in, they continue to challenge both their physical and mental endurance.

“People all over the world are fighting for their lives and they have no rest, so we’ve decided to carry on going to really make a difference and help more people.”

Already this year, they took on the Sydney Half Marathon. “Together we hope to keep going for the full 42km until we reach the Brandenburg Gate.”

We wish James and Kirsty the best of luck, and thank them for their ongoing support.