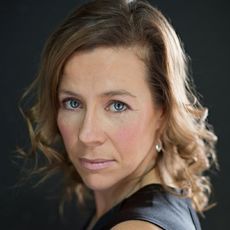 In April, dedicated ACRF supporter, Jodie Gardiner ran in the Australian Running Festival in Canberra and raised over $2,200. Now she’s working her way through a unique fundraising challenge she set for herself called ‘Fighting Cancer with Fitness.’ Jodie hopes to complete 100 workouts before her 42nd birthday while raising funds for a cause close to her heart.

In losing my step-sister Rachael, we didn’t just lose one woman we lost several because she was the center of so many universes. We always got on like a house on fire and shared a lot of similarities in our lives – we were both public servants who also qualified as a personal trainer and we each had two sons.

Rachael was diagnosed with a rare form of liver cancer called Sarcomatoid Hepatocellular Carcinoma. After ten months of treatment, she lost her battle. She was only 36 years old, leaving behind her loving husband, Paul and their two young sons.

Rachael was a great mother, it broke her heart that she would not be there to see her children grow up. She worried that her sons wouldn’t remember her, so she asked her family to promise to help make sure they would never forget her.

Paul has been an absolute tower of strength for his sons and is making every effort to ensure they still see their grandparents and that they will always remember their mum.

I am fortunate to have some great memories of Rachael. I worked at a gym with her a few years ago. We had an absolute ball working together – we learned so much about each other and became really close.

Rachael was such a fun, energetic and vibrant woman. She had such a passion for health and exercise, and her love of fitness inspired me to get my personal training qualifications. I remember not long after Rachael was diagnosed, her sister Kylie was attempting her first 10km fun run. Rachael and her family were waiting on the sidelines to cheer Kylie on.

Suddenly, Rachael ran out from the crowd to jog alongside her sister. Rachael motivated Kylie through the final kilometres and they crossed the finish line holding hands. It was a very special moment that I’m glad I got to witness and I think it beautifully sums up what sort of a person she was.

Losing her to cancer made us all realise that life is short and it has certainly made us all stop and smell the roses a little. Everyone knows someone who has been diagnosed with some form of cancer, I’m fighting for all of them.”