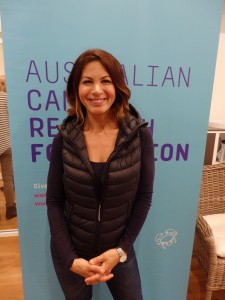 Carol Tannous-Sleiman is setting an incredible example for her three young children. Having just run in the 2015 London Marathon in memory of her father, she is already gearing up for another race and continues to raise funds for cancer research.

“The ACRF is an important charity for me and taking on fundraising challenges is something that I do on behalf of my father, my family and my children.”

In the lead up to London she raised an astonishing $11,000. “I can’t thank everyone enough, I’m very humbled that people have donated and are here to support me. Not only does it mean a lot to me, it really means a lot to the many survivors and families out there who have lost love ones to cancer.”

Her and her team of 29 staff from Greenwood Early Education Centre have been gearing up to run in this year’s City2Surf. Together they’re working with a personal trainer and planning a number of fun fundraisers in the lead up to the race, including an international party for both the kids and the parents to get involved in.

Over the years Carol has participated in many famous Marathons, including Paris, Chicago and New York. London was her twelfth Full Marathon and another to cross of the Bucket List.

“London was definitely in the top five – why not do a nice run, for a good cause, in a beautiful city like London?!”

Before having kids, Carol had never pictured herself as a runner. To keep fit she enjoyed a daily 8km walk. “Strangely enough, it was actually my busy lifestyle that provided me with the impetus to start running. With the demands of work and parenthood, I needed to find a more time efficient form of exercise. So I thought, why don’t I just run instead of walk?” Since then she’s never looked back, and has continued to move from strength to strength.

Her first real test was to run the 14km City2Surf and before long she found herself participating in 21km Half Marathons. She finally took on the full 42.2km at the Melbourne Marathon. “When you finally cross that line, it is the biggest sense of achievement. You get very tearful, it’s amazing I’m so excited to share in that moment with my team.”