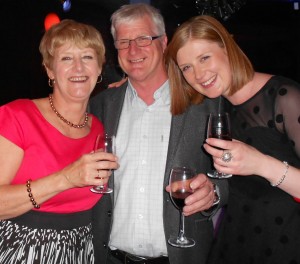 “The best gifts I’ve ever received were the cancer treatments that saved my parents. My mum was diagnosed with breast cancer when I was living interstate so when I got the phone call I was in utter shock and disbelief.

I came back to sit with her through as many of her appointments as I could because she just sort of shut off when they were going through all the different options, I think it was just too much to take in all at once. We had never been touched by cancer before, so everything we were hearing was new.

At an appointment, one of the doctors explained to us that there was a new experimental treatment available that allowed them to better target cancerous lymph nodes, which meant that she could still keep her healthy ones.

This new treatment was not only successful, it also lessened the aftermath of surgery. Some people may not know, but treatments have come a long way. This was a really eye-opening experience for me because it was the first time I could really see it first-hand.

Later that year my dad was diagnosed with bowel cancer and we actually thought it was a cruel joke because the diagnosis was now the third one to hit our family over just a few months’ time. We lost my grandpa to oesophageal cancer shortly after my mum was diagnosed with breast cancer.

I think after that we were on high alert because my dad noticed he was having symptoms and went in for testing straight away. It was because of this that they were able to catch bowel cancer early. I’m so thankful for the hard lessons we learned because I know they played a big part in saving my dad’s life.

I know there are a lot of great charities out there, but the thing with cancer research is that you never know how many lives could be saved with the next breakthrough.”