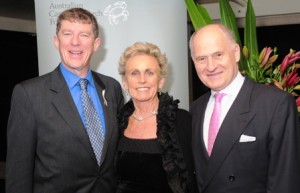 The Board of Trustees, management, staff and supporters of the Australian Cancer Research Foundation convey to Lady McMahon’s family our sincerest condolences.

Lady McMahon was a Founding Trustee and Life Member of the Australian Cancer Research Foundation (ACRF), which last year celebrated its silver anniversary.

Chief Executive of the ACRF, David Brettell said this morning “We will miss Lady McMahon greatly. Not only was she a shining star, charming and generous with her time and energy, she was also a totally committed Trustee, always available to share her extensive experience.

“She participated consistently and with real commitment to the mission and growth of the Foundation, attending and playing a critical role on the Board. Her contribution helped to ensure the Foundation remained focused on its core purpose of funding infrastructure and capital works for projects at the forefront of medical science in this country.

“Lady McMahon has seen her contribution to the Foundation, over twenty-five years, result in an unprecedented $60 million plus in private funding to breakthrough cancer research projects. Her legacy will inspire us to redouble our efforts”” said Mr Brettell.

“Lady McMahon inspired everyone she met with her commitment to raising funds for cancer research. She also reached out to researchers through her enthusiasm for their work and their findings. Her passing is thus a double loss to the research community, as enthusiastic supporters like Lady McMahon inspire researchers to overcome the setbacks that are day to day occurrences in their lives.”

“Sonia McMahon was at the forefront of ACRF work when we at St Vincent’s Institute of Medical Research were one of the first recipients of ACRF support in 1988. I had many direct dealings with her then, and over the years since that time, most recently at the Dinner at the end of 2010. She was always so supportive, generous and graceful, and constantly interested in what the actual research was about. All at ACRF and those who have benefited from ACRF work should be thankful for the large part of her life that she gave to the Foundation over more than 20 years.”

“How sad I was to read of the recent passing of Lady Sonia McMahon, as reported in the weekend press. Lady McMahon was obviously an extremely important supporter and instrumental to the fundraising success of a number of charities, most prominent among them the Australia Cancer Research Foundation. As recent beneficiaries of ACRF’s generosity, please be assured that Peter Mac’s researchers and clinicians have greatly appreciated Lady McMahon’s wonderful and sustained contribution to cancer research. Please pass onto Lady McMahon’s family our deepest condolences.”

“Sonia was a steadfast supporter of ACRF from its beginnings, never waivering from supporting the best and brightest cancer researchers. She was fundamental in the developing vision of the ACRF as a leader in recognising, supporting and often catalysing cooperation and synergy of the most innovative cancer researchers in Australia. Her pertinent observations were always conveyed with circumspection and grace.”

“The legacy of the ACRF may have been but one of Lady McMahon’s many activities in which she was involved but it was one where she has clearly left her mark by helping guide the Foundation to the situation it finds itself in today. We will sorely miss her relaxed and gracious presence as well as her valued considered contribution in pursuing the Foundation’s objectives.”

“To the very end, Sonia provided wisdom, grace and good humour at our Board table. Her contribution from the very first days of the Foundation was immense. She will be sorely missed, and fondly remembered.”

“Lady Sonia, thank you for your wisdom, grace, and generosity. We will miss you.”

“Lady Sonia McMahon has left her mark on the quality of life we in Australia enjoy and the ACRF is one of the beneficiaries of her influence. She played an important role as one of the founders of the ACRF and thereafter as one of its Trustees she continued to support , encourage and guide the pursuit of the ACRF journey. We will miss her but are better off for her association with us.”

“Our hearts go out to the family of Lady Sonia McMahon. The Australian Cancer Research Foundation would simply not exist without Lady (Sonia) McMahon. Over 26 years ago Lady McMahon approached Sir Peter Abeles to head up a new charity for medical research, dealing specifically with cancer. With a small group of Sydney philanthropists, she co-opted Sir Peter to establish the Australian Cancer Research Foundation in 1984, following the closure of Sydney Hospital which the group had been supporting. Since that time over $60 million has been awarded to outstanding, major cancer research projects in Australia, going directly to our top scientists to help fight cancer, including Professor Ian Frazer who discovered the vaccine to prevent and treat cervical cancer. Lady McMahon’s commitment and loyalty have been a huge factor in the success of the Australian Cancer Research Foundation. She will be greatly missed by fellow Trustees, staff and our many supporters.”