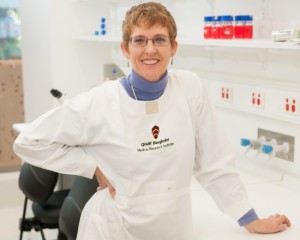 Endometrial cancer affects the lining of the uterus. It is the sixth most commonly diagnosed cancer in Australian women, with nearly 2,500 new cases expected to be diagnosed in 2016.

The study was led by the head of the Molecular Cancer Epidemiology laboratory at QIMR Berghofer, Associate Professor Amanda Spurdle, and has been published in Nature Genetics.

Associate Professor Spurdle said the findings helped to paint a clearer picture of the genetic causes of endometrial cancer in women who do not have a strong family history of cancer.

“Up until now, we have only known about four gene regions in women in the general population that contribute to the risk of developing endometrial cancer,” Associate Professor Spurdle said.

“In this study, we have identified another five, bringing the total to nine. This finding doubles the number of risk regions we know of, and therefore significantly increases our knowledge of the genetic drivers of endometrial cancer.”

The study also looked at how the identified gene regions might be increasing the risk of other cancers, and what the implications would be for the future treatment of endometrial cancer patients.

Interestingly, several of the gene regions we identified in the study were already known to contribute to the risk of other common cancers.

“As we develop a more comprehensive view of the genetic risk factors for endometrial cancer, we can start to work out which genes could potentially be targeted with new treatments down the track,” Associate Professor Spurdle said.

“In particular, we can start looking into whether there are drugs that are already approved and available for use that can be used to target those genes. Our genetic findings may also be useful, together with our knowledge of other risk factors, to identify women at risk of endometrial cancer so they can be regularly checked and be alert to the signs and symptoms.”