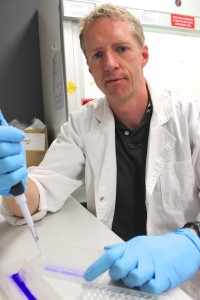 Cancer researchers at Hudson Institute of Medical Research have discovered a potential new way to halt the progress of lung cancer and emphysema, offering new hope to the 15,000 Australians who die from the diseases each year.

The researchers identified that an inflammation causing molecule, Interleukin 6 (IL-6), drives lung cancer and emphysema. They then found that an existing drug, sgp130Fc, has the ability to halt the progression.

The drug is currently in clinical trials for other diseases which develop through a similar mechanism, for example, inflammatory bowel disease. The team now believes the drug has clinical potential in lung cancer and emphysema.

“We were surprised to discover that lung cancer and emphysema are so closely linked when they are such different diseases. Emphysema is characterised by the loss of lung tissue and lung cancer by uncontrolled growth of tissue,” said Project Leader, Professor Brendan Jenkins.

Early detection may be as simple as a blood test

The team also found out that a simple blood test could detect both diseases much earlier. Professor Jenkins’ team is now working with clinical colleagues at Monash Health, led by Professor Philip Bardin, to analyse the blood samples of lung cancer and emphysema patients in the hope of developing an early detection blood test for both diseases.

“By matching blood results to the severity of the disease, we will look to confirm whether a blood test is an effective earlier test for emphysema and lung cancer,” said Professor Bardin.

“Early detection is crucial to effective management and treatment of both diseases. A blood test has the potential to vastly improve survival rates through earlier diagnosis while sgp130Fc has the ability to halt the progression of lung cancer and emphysema,” said Professor Jenkins.

Professor Jenkins is cautiously optimistic about the drug’s potential. Armed with both findings, his team will now also investigate the potential uses for sgp130Fc in the management of lung cancer and emphysema.

“Not every patient with emphysema or lung cancer is a candidate for this drug, but with clinical trials, we can identify which patients would respond to treatment and at which stage of the disease. We believe there’s a real opportunity here to target and treat patients with these lung diseases.”

The study has been published in the prestigious American Journal of Respiratory and Critical Care Medicine.