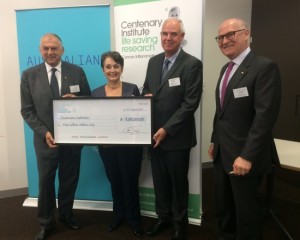 The new centre will focus on two key specialist areas of cancer research – understanding the inflammatory and metabolic causes of cancer and the drivers behind cancer-driven blood clotting.

By investigating these two areas, the research team hopes to unveil how changes in metabolism support cancer growth and how these changes can be controlled by new treatments and therapies.

The ACRF Centenary Cancer Research Centre will be headed by Professor Philip Hogg, a world-renowned researcher whose expertise lies in the discovery of new cancer-active drugs and therapies. The centre will host a team of over 40 dedicated cancer researchers whose capability spans fundamental research to clinical trials.

“I would like to thank ACRF and their supporters for funding the new centre. It will significantly expand the Centenary Institute’s capabilities in cancer research and accelerate the development of new treatments for cancer patients,” said Professor Hogg. “Having this new facility has also helped us attract a brilliant team that includes some of the world’s leading scientific minds.”

ACRF’s CEO, Dr Ian Brown said, “Supporters of ACRF helped lay the foundation for this centre, a centre that will help the team at Centenary reveal key information that will help inform better cancer treatments which is an exciting step forward.”

The establishment has been a collaborative effort lead by the Centenary Institute and included the Australian Cancer Research Foundation, Sydney Catalyst, Sydney University, the Charles Perkins Centre, RPA Hospital and Chris O’Brien Lifehouse.