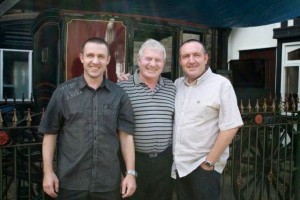 “I have chosen to become a Partner in the Cure due to the recent passing of my father, Stan Phillips, at age 76. My father was a major influence on me and truly was a great man. He lived his life to the fullest and touched the hearts of many. He lived a long life, but for me his passing still came too soon, I was hoping he would be around longer to see his two grandchildren grow up.

He was very fit and I think he would have had years left if it wasn’t for cancer. It was a shock when he had to be rushed to hospital and we discovered he had bowel cancer. He fought a hard battle for three years right up until he passed, and through it all he was positive, smiling and enjoying life.

He was a real family man who put us first and was more concerned with my family than his own struggle. He worked hard to give us every opportunity in life and rarely treated himself. He was my mentor, training partner and best friend. The way he lived his life and fought cancer is why he is my role model; I will be happy if I can live up to just half of his standards and I hope I can pass this attitude to life onto my children. It’s amazing what a perfect father he was especially when he lost his own in the 2nd World War at the age of four.

His determination in life led him to be successful in several different careers, starting out as a carpenter, then serving in the Elite Parachute Regiment, and finally becoming a construction site manager. He was also wonderful husband to my mother Margret. Today would have been their 50th Wedding Anniversary.

Karate was one of his favourite hobbies. He trained for eight years earning his black belt in 1983 and only stopping a few months prior to his passing when he became too ill. The club he belonged to now awards a trophy in his name.

He requested that people make donations to cancer research in lieu of bringing flowers to his funeral. He believed, as I do, that if we can contribute to the advancement for a cure it will one day save my children or grandchildren from this terrible disease,” Nathan Phillips.