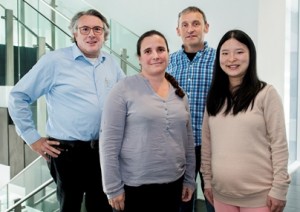 Patients with acute myeloid leukaemia (AML) can look forward to the development of new therapies following a discovery by cancer researchers at Walter and Eliza Hall Institute.

While investigating ways to target particular types of AML, and hoping to increase the chance of a cure for the patient while limiting damage to healthy cells, the team discovered a new way to kill cells that are dangerously multiplying.

A process known as apoptosis (programmed cell death) is a natural and necessary response to keep the proliferation of human cells in check. Apoptosis is interrupted in cancers, including AML, leading to unchecked cell growth.

Dr. Gabriela Brumatti said traditional chemotherapies, which encourage apoptosis, have a high relapse rate. For example, within five years of completing treatment, half of AML patients suffer a relapse of their cancer, and of those who relapse, only 50 percent survive.

Her team tried a ‘blue sky’ approach, inhibiting apoptosis of AML cells in order to unleash an alternative form of cell death called necroptosis. They found that the necroptosis cell death pathway was more effective at killing AML than apoptosis.

In preclinical trials, they used a combination of drugs – birinapant, a new anti-cancer drug, and emricasan, a US Food and Drug Administration (FDA) approved inhibitor of apoptosis – to kill AML.

“It has been speculated that inducing necroptosis might be an effective way to kill cancer cells,” said Professor Silke. “Our work now demonstrates clearly it is a clinically feasible and safe approach.”

Dr. Brumatti suggested that since cancer cells often acquire resistance to traditional chemotherapy-induced apoptosis, this novel type of chemotherapy has the potential to be used to treat otherwise impossible to treat leukaemias.

These findings have just been published in the research journal Science Translational Medicine.

The original news post was published on the WEHI website. Images of the research team courtesy of WEHI.