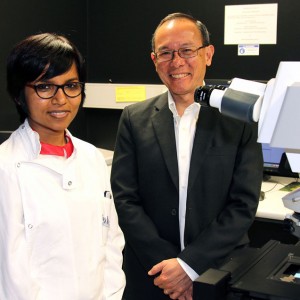 Here at the ACRF we are proud to equip Australia’s leading cancer researchers with the resources they need to end cancer.

Recently, a team of researchers from the University of Queensland discovered a protein that helps to control an important process in cell adhesion that is disrupted when someone contracts a disease such as skin cancer.

It is currently one of the largest and most comprehensively equipped facilities in Australia for both the imaging and screening of chemical and biological libraries.

The facility was founded in 2010 with a $2.5 million ACRF grant and is home to 23 high-performance microscopes and supporting image data analysis workstations.

PhD student Rashmi Priya at IMB says that what the research has done is clarify the role of the protein myosin in tissue integrity.

“The protein Myosin is found at cell connection points and we now know that it plays a crucial role in regulating how cells stick together to form tissues in the body,” she said.

“Our research has shown that this is because myosin protects a switch that acts as a stabiliser. This switch must be very tightly controlled as it affects many processes within the body. Too much or too little of this switch, or having it in the wrong place, can lead to diseases such as skin cancer, says Priya.”

Professor Alpha Yap, who led the research team, says “The cells in all the tissues of our body die and have to be replaced as regularly as every 24 hours in the intestinal system. For this to happen, adhesion between cells must be carefully broken down and rebuilt, and we now have a better understanding of what it is that’s controlling this whole process.”

The original article was published on the Institute for Molecular Bioscience website, click here to read more.