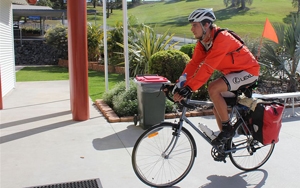 We first met Will Ashley when, at the age of 16, he cycled from Coffs Harbour to Sydney with his best mate in tribute to a very special breast cancer survivor, Will’s mum.

The next year, Will rallied two other adventurers, including his brother Jo, to kayak over 2000Km down the Murray River and raise even more funds for world-class cancer research in Australia. We thought the amazing spirit and generosity of Will Ashley must have no end. And we were right:

Just last week, Will completed yet another epic fitness challenge in support of the ACRF.

At the beginning of September, he rode off on his bike from the Daly Waters Pub in the Northern Territory. In front of him stretched a four week solo journey, which would bring him back his home in Coffs Harbour, NSW.

The days were hot, long and often frustrating – juggling knee injuries, much-needed rest days, and stiflingly hot weather. But Will says the challenge was worth it.

“It was a wonderful ride,” he said.

“Especially North West Queensland where the country was so barren.

“There were a few hiccups. I injured my knee and had to hitch a ride to a physio, but all in all it was an awesome experience.”

At night Will would set up camp on park benches or on a beach and then as dawn broke he’d jump back on his bike and start all over again.

Each day Will pedalled for about 10 to 12 hours, and in the final stretch from Ballina to Coffs Harbour he also had traffic to dodge.

Will planned to raise $10,000 for cancer research in the lead up to, and during, his 3,200km trip. In addition to this most generous goal, Will also stopped in at schools along the way to talk to the students about goal-setting, and healthy lifestyles. Will wanted to show them anything is possible if they want to try and make a difference.

Will arrived back in Coffs Harbour last week, riding into his old school hall at Bishop Druitt College, packed full of students, teachers and family who were eager to congratulate him.

We’d like to thank Will for this amazing fundraiser. His dedication and generosity is truly humbling and his efforts in raising $10,000 by himself is truly an inspiration.

If you would like to find out more about Wills ride you can read about it here. Will also kept a video blog of each of his days – you can watch them here.[/vc_column_text][/vc_column][/vc_row]