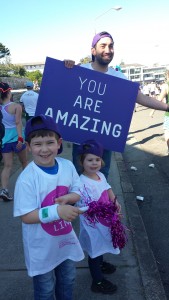 This past weekend over 80 thousand people participated in the iconic 14 kilometre City2Surf. Runners set off from Hyde Park in the heart of Sydney’s CBD and made their way through to the finish line at Bondi Beach.

This year, Team ACRF was made up of 190 incredible runners from all walks of life. Thanks to their hard work and dedication they were able to raise over $117k for cancer research.

Many of the ACRF runners have been personally affected by cancer, including Jonathan Wiener, who had an army of supporters contribute an astounding $20,000 in memory of his cousin Michelle, who lost her battle with brain cancer in February.

“I promised Michelle that I would do everything in my power to find a cure for this devastating disease and running City2Surf for cancer research is my first step in keeping that promise.”

Supporting them along the way were 35 enthusiastic volunteers who cheered on Team ACRF and doled out high-fives from the sidelines.

One of ACRF’s Corporate Champions, Deloitte, generously sponsored a fantastic beach front Marquee where ACRF runners and their families joined the Deloitte team for a congratulatory lunch on the beach.

The ACRF thanks everyone who participated in the City2Surf or who came out to support our runners on the day. We loved meeting you all and celebrating your achievement. 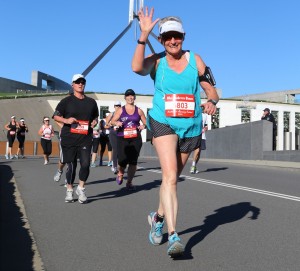 “I truly believe we will beat cancer, possibly in my lifetime.” – Professor Anne Boyd.

Professor Boyd is 69 years young and discovered her passion for distance running only a few short years ago. This has led her to not only become a great advocate for cancer research, raising both funds and awareness, but it has also led her to win the Sydney Striders F65-69 Marathon trophy and become the Southern Highlands Challenge poster girl!

Her love affair with running began back in 2013, when she decided that, in celebration of her 67th Birthday, she would compete in her first 5K run at the Australian Running Festival in Canberra.

Two years later, she has become a dedicated running enthusiast and has completed a number of challenging races including City2Surf, four Half Marathons, the Melbourne Marathon and numerous other competitive10Ks.

“I’ve loved every step, even the more painful ones. I enjoy mid-race conversations with other runners and play up photo opportunities! A camera is always worth a grin and a grin helps deal with any fatigue issues which might be building up. Although there is real pleasure in achieving a personal best, my only important aim in a run is to finish,” says Anne.

Anne sees the sport as a really great way to raise funds for a cause that touches all our lives.

“I am personally so grateful for advances in cancer research. I’ve had tests detect precancerous polyps, which I had removed, and a recent breast scan that detected a small lump which was quickly determined not to be of any danger. These advances, of course, are bought about through the research that has made such great strides in my lifetime. But it needs everyone’s support, so I’m really happy that I can do my part and run for this cause.”

Anne’s daughter, Helen Louise is a huge supporter of her mum’s new found hobby and has been a great source of inspiration and encouragement to her since the beginning. As a distance runner herself, she became her mum’s go-to for knowledge on all things running and even ran alongside Anne in her very first race, helping her to achieve third place in her age division.

“My darling daughter ran with me as a warm-up for her serious event the next day and was rewarded with considerable grumpiness from her hot and bothered mother during the final kilometres! But to finish was a joy! She has played a key role in my new found passion, so now, where she leads, I follow.”

To support Anne at this year’s City to Surf, click here.

Every one of us has a unique set of talents, and our mission at the ACRF is to support Australia’s top cancer researchers to do what they do best.

It’s not easy to find the motivation to explore your strengths and creativity, but raising funds to help the experts find new treatments and cures for cancer might be just the inspiration you need! To help get your started, see what some of our supporters are doing.

May Carrick is a police officer by day and a musician who records his albums by night, dedicating all proceeds to cancer research in honour of his father whom he lost to cancer two years ago. May first began writing music to help him cope. Check out his latest album here.

Mikaela Designs is an amazingly talented sketch artist who recently showcased her work in honour of her late friend Casey. Her artwork was auctioned off to the highest bidder at an exhibition that she organised for cancer research.

Kirin Matthews is the founder of Jewellery for a Cause – a jewellery company with a passion for supporting charitable organisations and important causes. She donates 20% of each piece to charities such as the ACRF. View one of her latest creations here.

If you’re still not sure what type of charity fundraising you want to do, you can visit our A-Z fundraising page for more fun ideas on how you can make the most of your own unique talents. 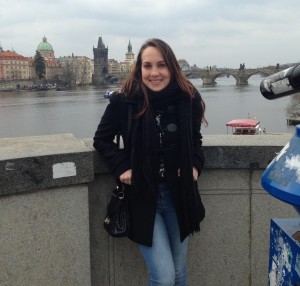 As the great Mahatma Gandhi once said, “The best way to find yourself is to lose yourself in the service of others.”

Here at the ACRF we are lucky to meet so many wonderful people who live this mantra. From marathon runners, to head shavers, to gala dinners and everything in between, we get to watch people’s own strength and creativity shine in all their efforts towards raising funds for cancer research.

Our most dedicated volunteer groups are known as Cancerians Committees. Together these event-based charity volunteers have raised millions of dollars for world-class cancer research by organising annual events in their local area. Click here to take a look at our amazingly dedicated Cancerians.

We are also incredibly fortunate to have a number of volunteers who give their time to help end cancer, by helping out in our office.

We wanted to take a moment to share some of their stories with you.

Lisa Sliteris: “It is an easy task to acknowledge the need for change, but it is more the action taken after this that determines the outcome. By volunteering, it gives you the chance to take such action for a cause that you are passionate about. I chose to volunteer for the ACRF as I wanted to be part of a positive goal directed and committed team. Their ambitious and hard work has had a major influence for cancer research, and I hope that through my volunteer work, I can contribute to future their accomplishments.” 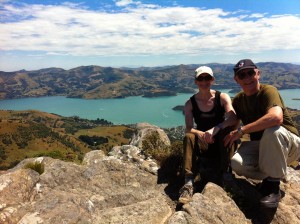 Duncan Innes: “Why volunteer for ACRF? Well, apart from the fact that cancer is likely to affect one in two men personally during their lifetime, my Mum, my favourite boss and my mother-in-law have all been cancer patients. My grandad died of stomach cancer 50 years ago, too.

When I started my career as a hospital administrator, bone marrow transplant was experimental: four out of five leukaemia patients didn’t survive. Now, four out of five kids do survive. So that tells you how important cancer research is, and how it is a long-term game. Contributing my time and my skills to that is definitely a worthwhile thing to do!” 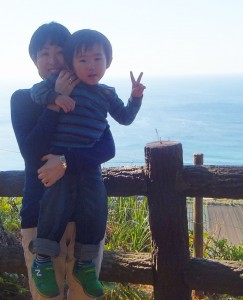 Sayako Inoue: “My sister found out she had thyroid cancer when she became pregnant with her first child. Thanks to the latest treatments she was able to receive, she has been well and my nephew is turning five this year. I thank ACRF for giving me the opportunity to invest my time in the cause I believe in.”

A big thank you again to all the volunteers out there, we get closer every day to ending cancer because of you.

If you would like to find out more about how you can volunteer with the ACRF, click here. 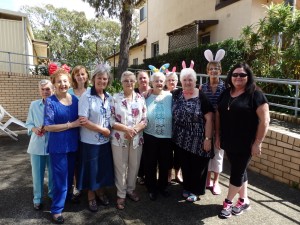 Our Bexley North Cancerians Committee hosted another event last week – this time getting crafty for an Easter Hat Parade.

This amazing charity volunteer group has been hosting small events and afternoon teas for cancer research for the last 20 years, using special occasions such as Easter as a chance to get back in touch with each other, have a catch-up and a laugh.

After all, fundraising should be fun!

Our staff member Michael was delighted to attend, and to judge the hat parade. The cancer fundraising event also included an Easter themed word-search and a raffle, in total raising $1,600.

Since they started supporting the ACRF many years ago, the Bexley North charity volunteer group have presented to the ACRF an incredible $95,000 in funds raised for cancer research. They truly are the perfect example of how “every little bit counts” and we are so grateful for their support.

We’d like to thank all of the Bexley ladies, and send a special thank you to leaders of the Committee, Betty Holman and Carole Pont. We know we couldn’t continue to fund world-class cancer research without the support of these very special charity volunteer and fundraising groups. 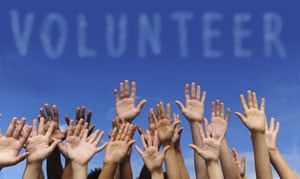 This week we celebrate the power of volunteering with National Volunteer Week in Australia.

We would like to highlight the value our cancer charity volunteers bring to our communities and society. We are very thankful, humbled and honoured when members of our community, a group or a corporate partner chooses to dedicate their time and effort into volunteering for us.