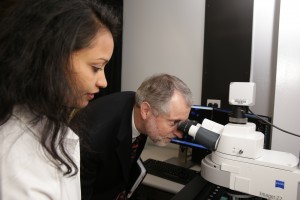 Recent findings argued a strong case for the development of this cutting-edge facility, indicating Telomeres could hold the answers to significant advancements in the treatment of some of the most aggressive types of cancer.
Telomeres are structures that cap the ends of our chromosomes. They serve a critical role in the cell renewal process and under normal conditions, gradually shorten as we age.

But studies at the Children’s Medical Research Institute have shown that cancer cells develop ways to disrupt this natural process. They re-program cells to prevent their telomeres from shortening, causing the DNA to “short-circuit” and cells to multiply out of control.

Furthermore, researchers have found ‘lock’ mechanisms on normal cancer cells which prevent this process. The ‘lock’ on cancer cells, however, is damaged, providing researchers with a new target for treatment.

CMRI Director, Professor Roger Reddel, who was involved in the research, said “We think that losing this lock makes cancer cells vulnerable to treatments that normal cells are protected against. So we may have found an Achilles heel for certain types of aggressive cancer.”

“The ACRF’s Medical Research Advisory Committee assessed this research initiative as both nationally ground-breaking and internationally competitive. The ACRF and our supporters are very proud to fund this life-saving work at CMRI,” said ACRF Chief Executive, Professor Ian Brown.

The new ATAC facility was funded with a $2 million ACRF grant and is outfitted with some of the most advanced technology and cutting-edge equipment that exist in this field. These microscopes and computer analysis stations provide speed and accuracy on unparalleled levels, helping to propel telomere-related cancer research to new heights and accelerate the race toward new treatments, and ultimately, cures for cancer.