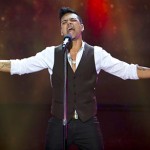 Australia’s Got Talent grand finalist, Andrew De Silva has shown his support for cancer research by becoming an ACRF Ambassador.

We were fortunate enough to catch up with Andrew just before his Australia’s Got Talent final to hear more about his journey through testicular cancer.

ANDREW DE SILVA’S KNOWLEDGE OF THE AUSTRALIAN MUSIC SCENE STEMS BACK FURTHER THAN MOST.

A taste of fame in the nineties as part of popular music group CDB has set the stage for what anyone can see is an exciting second chance for this amazing vocalist. His recent success as a grand finalist on the Seven Network’s ‘Australia’s Got Talent’ has also allowed Andrew to tell his story to the world.

“Cancer research is so important to me. Not only has it affected me personally, but it has also affected my family and so many friends,” Andrew told us. “I’ve watched it take the lives of the young & old, and then it also changes the lives of the people that are left behind.”

Andrew has touched so many hearts as he has progressed through the reality television competition and shared his progressive soul/rock originals. We are delighted and humbled to be able to call him an Australian Cancer Research Foundation Ambassador, and to learn more about his journey through cancer:

“I was 23, busy recording and touring with CDB,” Andrew told us. “We were on tour doing the Tina Arena support show at the time, when I realised something wasn’t right – I had noticed a lump on one of my testicles.

“When I returned home I had it checked by my GP, and then a specialist who told me that it could be nothing – but to have it checked properly just in case.

“Being so busy, and wanting to believe it wasn’t serious, I ignored it and went back on the road again. But then a month passed and the lump got bigger. I went back to the specialist and was diagnosed with testicular cancer. Days later I was in hospital waiting to be operated on.

“I was shocked that this had happened to me – but I had a strange feeling at the same time that it was actually meant to be. I really felt that the time had come for my life to take a pause – I needed to take some time out.

“After the cancer was removed I was given the option of chemo – which I took to make sure it was all gone. I then had checks & scans for the next few years to make sure it hadn’t come back.

“My parents were quite upset during this time. Parents just want to protect their kids but when it’s out of their hands they feel helpless. But I had a lot of people praying for me so there was definitely a feeling that everything was going to be alright.

“I encourage everyone, especially men who are usually shy to speak up about their problems, to have any abnormalities or concerns checked out by your GP. Even if it’s something small, or something you don’t feel is important – don’t be scared and don’t ignore your health.

“Once it’s gone, it can be a very hard road to repair.”

At the Australian Cancer Research Foundation, we are preparing for an international campaign that focuses on raising awareness of men’s cancer: Blue September. If you would like more information on the cancers which affect men the most, and/or how you can help fund research into these types of cancers, please visit http://www.blueseptember.org.au.