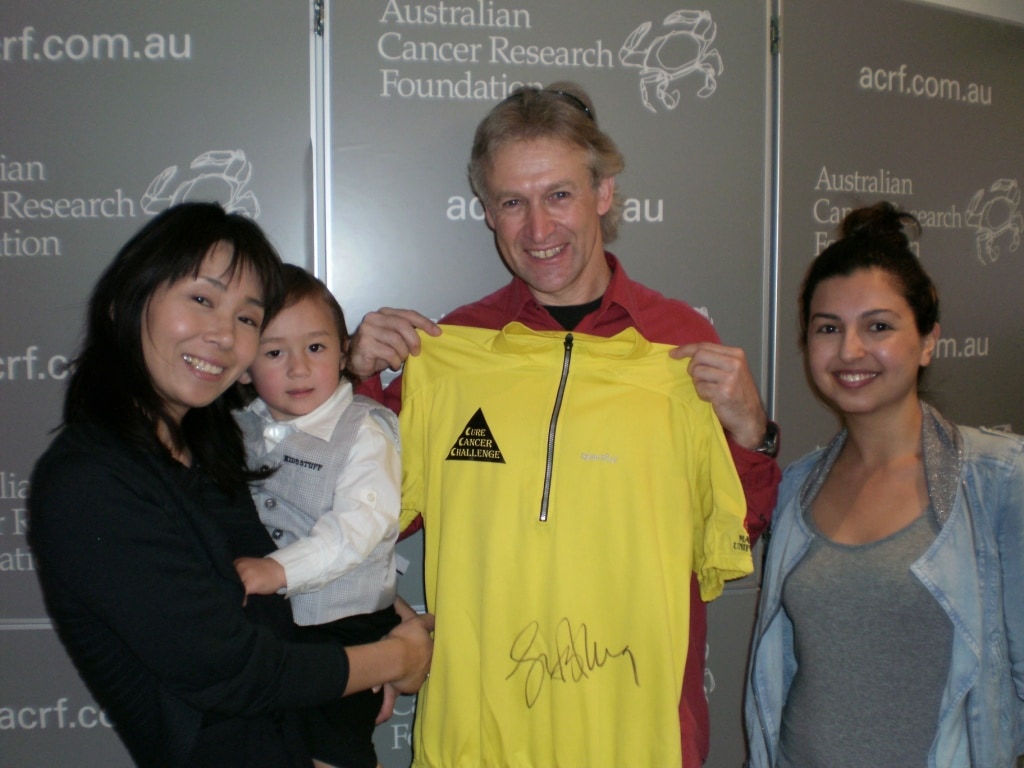 World-renowned cyclist and seven-time winner of the Tour De France, Lance Armstrong, has come to the aid of the Australian Cancer Research Foundation (ACRF).

Recently, the champion who had his own health scare several years back when he battled testicular cancer, signed a t-shirt given to him by one of our awesome supporters, Adelaide nurse Mark Gibbens.

The signed t-shirt is to be auctioned by the ACRF to raise funds for vital cancer research.

Gibbens wore the shirt on his “Cure Cancer Challenge” trek last year and presented it for a signature by Armstrong when the champion cyclist was in Australia on his “Tour Down-under” in January and February 2010. Gibbens, a registered nurse, husband and father of one, walked a staggering 5300 KM from Perth to Sydney to raise funds for cancer research in 2009.

His marathon walk was a tribute to a close friend and mentor who died from cancer in 2007, as well as all of the cancer patients (and their loved ones) that he has encountered during his time as a nurse.

Gibbens, who was in Sydney last week to attend the Asia Pacific Conference on Tobacco or Health, dropped into the ACRF office to generously donate the t-shirt signed by Lance Armstrong and offer his encouragement for our work in raising funds for cancer research.Previously Gibbens had undertaken a 3000-kilometre walk in Japan where he raised major awareness in a campaign against the dangers of smoking.

The story and pictures of Mark’s ACRF walk were presented at the recent conference. Nice one Mark!

Keep checking our website for further details on the auction of the Gibbens “Cure for Cancer” t-shirt signed by legendary cyclist Lance Armstrong.

Read more about Mark and his Cure Cancer Challenge.