Why some moles become melanoma still a mystery 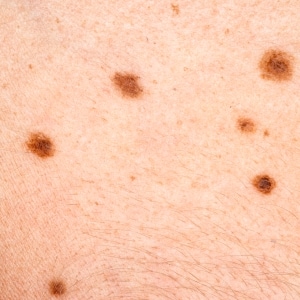 Our definition of a Melanoma is a cancer that begins in the melanocytes. Most melanoma cells still make melanin, and so melanoma tumours are usually brown or black, however, some melanomas do not make melanin and can appear pink, tan, or even white.

The risk of Melanoma increases with exposure to UV radiation from the sun or other sources such as solariums, particularly with episodes of sunburn.

As stated by the Melanoma Institute of Australia, Australia has one of the highest rates of melanoma in the world and kills more young Australians (20 -39-year-olds) than any other single cancer.

Testing for two gene mutations commonly associated with melanoma would be insufficient to determine whether a mole could turn cancerous, University of Queensland research has found.

“In Australia, about half of all melanomas develop from a naevus, but most moles will never progress to become a melanoma,” Dr Stark said.

“We are trying to determine what causes some naevi to change so that we can better predict or more accurately detect those which could become dangerous.

“This would help avoid unnecessary excisions of those lesions unlikely to pose a risk.”

Scientists from UQ’s Dermatology Research Centre analysed samples from participants in the Brisbane Naevus Morphology Study, and discovered all had one of two key mutations associated with melanoma.

“When either of these genes are mutated it activates the signalling pathway known as MAPK, which is commonly active in melanomas.

“Clearly our samples were not melanomas, so additional genomic events need to occur before a mole becomes malignant.”

Dr Stark said further research was underway to determine other genetic changes that could trigger the development of melanoma from naevi.

Studies have consistently shown the number of naevi a person has is the strongest predictor of risk for melanoma.

Dr Stark said people with a high number of moles, and other risk characteristics such as fair skin or light coloured hair or eyes, should continue to see their treating dermatologist or skin cancer physician for routine skin examination.

Dr Stark is a National Health and Medical Research Council (NHMRC) Early Career Fellow. The UQ Dermatology Research Centre is a participant in the Centre of Research Excellence for the Study of Naevi, and is based at the Translational Research Institute.

The research was published in the British Journal of Dermatology.

If you would like to donate to help fund research to prevent, detect and treat all types of cancer, including melanoma, you can donate here to help Australians affected by this devastating disease.