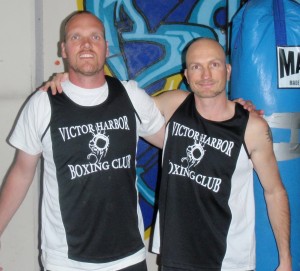 Recently, ACRF supporters, Mark and Joachim took on the Australian Masters Games representing the Victor Harbor Boxing Club. Both men had been interested in boxing training for a while and made the decision in early 2011 to begin preparing for the Masters Games in October. As an extra incentive to keep up with the training they chose to raise funds for cancer research at the same time.

“I chose cancer research because there would not be many people who have not had a family member or close friend effected or lost to cancer” says Mark. Mark and Joachim also believe the challenge they were facing “is nothing compared to what a person with cancer has to go through”. Knowing they could make a difference, they reached out to family and friends to sponsor them and got on with their training.

On competition day – both men went really well – even bringing home some medals!

Congratulations and thanks to Mark and Joachim for taking on the Australian Masters Games challenge and helping to raise much needed funds for cancer research.