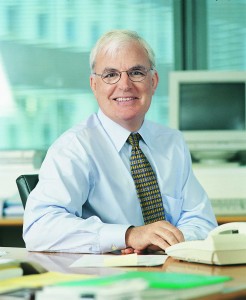 The ACRF was deeply saddened to learn of the passing this morning of one of the giants of cancer research in this country, Professor Rob Sutherland. The Board, staff and supporters of ACRF convey our deepest sympathies to Prof. Sutherland’s wife Cheryl and all members of their family.

Prof. Sutherland was a very long-serving member (20 years), in a totally honorary capacity, of our scientific advisory committee and was awarded Life Membership of the ACRF in 2009 for exemplary service.

At the time of his passing, he was Head of Research at the Garvan Institute of Medical Research, and also Director of the newly-created Kinghorn Cancer Centre in Sydney (which combines the Garvan and St Vincent’s Hospital). The Kinghorn Cancer Centre was officially opened by the Prime Minister in late August this year and only yesterday, ACRF was privileged to open the new ACRF-funded Molecular Genetics Facility within the centre. Professor Sutherland was one of a small number of visionaries behind the creation of this comprehensive cancer centre, and was undoubtedly well pleased that the initiative had become a reality during his lifetime.

Professor Sutherland has been a leader in Australian cancer research, and the research sector is much the poorer his passing.

Thank you Rob for your great service.