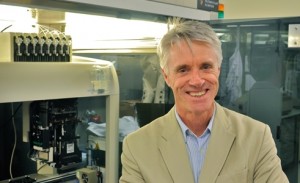 We often think of evolution as a positive thing, associating it with progress, growth and development. But because evolution exists in all living things, including cancer cells, it also presents one of the greatest challenges for researchers as they seek out new ways to outsmart an ever moving target.

But thanks to the team of world-leading researchers at the ACRF funded Peter MacCallum Cancer Centre at least four evolutionary processes have now been identified that enable ovarian cancer cells to resist chemotherapy treatments.

Their new insights into how these cells genetically change to become resilient will allow researchers to investigate more effective treatments – treatments that are tailored to break through each defensive barrier.

The defence mechanisms identified in these cancer cells included everything from “hijacking” genetic switches that enable them to pump chemotherapy drugs out of their way to reshaping and accumulating “scar tissue” which appears to block the chemotherapy drugs.

‘In this research we saw stark reminders of how evolution presents us with incredible challenges – to fight an insidious enemy, you need to understand them, and we’ve made a great leap forward thanks to a truly international collaborative effort ,’ says Peter Mac researcher Professor David Bowtell.

Before this clinicians would watch as initially effective treatment became ineffective and cancer cells made an aggressive comeback in their patients. For decades they had little information to guide them when selecting treatment for women whose cancer has returned.

‘The research is a turning-point in the global fight against ovarian cancer it offers great hope to patients world-wide,’ says Professor Bowtell.

To date this has been the largest complete DNA analysis of ovarian cancer in the world and it would not have been possible without the outstanding support of ACRF donors.

This information was originally published by the Peter MacCallum Cancer Foundation.