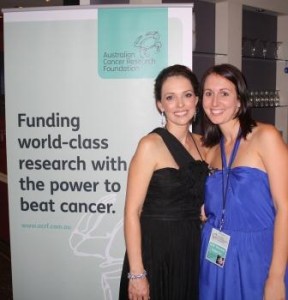 The Australian Cancer Research Foundation (ACRF) would like to send a huge thank you to the Kiama Central Senior A’s Netball Team for their incredible support of cancer research.

Late last year, the team set themselves a goal to raise $30,000 for our cancer charity before the team captain Karen Appleby’s 30th birthday. Their efforts culminated in February with a grand ball (“A Bit-of-Bling Black Tie Ball”) which brought families, friends and local businesses together for a night of entertainment, dinner and dancing.

This dedicated group of women unfortunately have a very good reason to be so passionate about cancer research, as each member of the team has supported a parent through this terrible disease.

Some have been lucky and their parents have recovered, but others are still fighting cancer or have sadly lost their battles.

Karen, whose mother is now in remission after being diagnosed with breast cancer twice, said the heartbreaking statistic was not a team curse, but a mark of how common cancer has become.

“If you look at the statistics, one in two people are affected by cancer, which is pretty amazing – crazy really,” she said.

“It means we’re all very understanding and supportive of each other because we all know what it’s like to hear the news.”

The team organised several different cancer fundraising initiatives in their quest to reach their goal. In addition to the “Bit-of-Blink Black Tie Ball”, they ran a tea towel and a trivia night. All of their hard work paid off and their total charity donation far exceeded their original goal, at over $43,700.

To Karen, Kelly, Melissa, Kate, Zoe, Casey, Robyn, Elisabeth, Jenna, Lyndal, Jennie and Sarah – we are so grateful that you chose to support the ACRF! Donations such as this make a huge impact on our ability to fund research with the power to beat cancer.