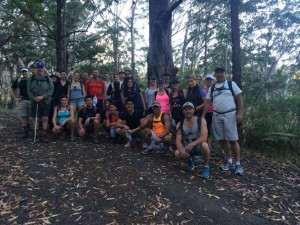 27km of cliffs, oceans, waterfalls, steps, hills, rocky ascents, rivers, leeches, lots of mud, sweat was made all the more bearable for a team of CBA staff through the knowledge that together, they were doing something truly worthwhile.

Their hike for cancer research fell on one of the hottest days Sydney has had this Spring – exceeding 35 degrees! But the ‘CBA 27km Walk for ACRF’ kicked off bright and early at 6am, with the team determined to cover the coastline of the Royal National Park – from Otford to Bundeena – in just one day.

Finishing 8 hours later, at 2pm, the team were exhausted and relieved, but also very happy to have finished the trek raising much needed funds for cancer research.

The team were led by ACRF advocate, Mina Masoumian.  Incredibly, this will be her 5th year fundraising for cancer research in Australia. She has helped to raise over $40,000 by herself and we are so humbled to have someone like Mina, who continues to go above and beyond to support our work.

This year, Mina worked with her CBA team to smash their goal of $15,000, raising well over $17,000 to help end cancer! What an amazing achievement!

We are so grateful to the CBA team for their dedication and support in taking on such an epic challenge! Thank you; you’re all legends in our eyes.