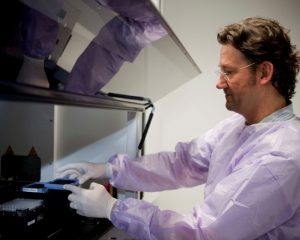 Recent advances in drug discovery technology and molecular studies could help scientists develop a suite of potential drugs that target telomerase – the enzyme that controls the number of times a cell divides before stopping.

Telomerase is disrupted in cancer and makes cancer cells divide out of control. It is located at the ends of chromosomes, in the telomeres, which shorten with each cell division.

“We’ve known for more than 20 years that telomerase helps cancer cells achieve immortality, but we still don’t have a safe, effective drug on the market that inhibits it, said Dr Arndt, Manager of the ACRF Drug Discovery Centre at CCI.

In their review paper, Drs Arndt and MacKenzie distil current knowledge about telomerase and argue that, with the increased rapidity and sensitivity of today’s molecular analysis technologies, researchers should explore new approaches. They say that targeting telomerase beyond its usual role in the telomere could be the key to finding the next generation of small-molecule telomerase inhibitors.

Dr Arndt says automation of drug testing means it takes days rather than years to test thousands of chemical compounds against normal and cancer cells.

“We have technologies now that weren’t available when telomerase was first studied. These allow us to explore it in more detail than ever.

“We can bring new knowledge in cell biology and drug discovery together and speed up the search for new therapeutics”, Dr Arndt said.

Looking beyond the telomere is an approach Arndt and MacKenzie have some success with. In April the researchers published in the journal Cancer Research some exciting findings showing that targeting dyskerin, one of the protein components of telomerase, rapidly kills neuroblastoma cells but in an unexpected way.

MacKenzie said neuroblastoma is a cancer responsible for 15% of Australian childhood cancer deaths.

“We found that, without dyskerin, neuroblastoma cells stopped dividing and died in days, most likely because dyskerin has roles beyond the telomere. Without dyskerin, the protein-building machinery falls apart and the cell dies – an effect that is independent of the telomere” she said.

This intriguing result could have implications in the search for drugs that target dyskerin in other adult and childhood cancers. The next step is to find chemical compounds that target the protein using drug discovery technology for potential use in personalised medicine.

The ACRF Drug Discovery Centre at Children’s Cancer Institute screens many thousands of novel chemicals to identify potential new drugs. The Centre also contains high content imaging software that analyses cell changes and 3D computer models of molecules. It was established with the help of a $3.1 million seed-funding grant from the Australian Cancer Research Foundation in 2009.

The original news was posted on the CCI website. Image of Dr Arndt courtesy of CCI.