Supporting Australian cancer research in honour of my dad 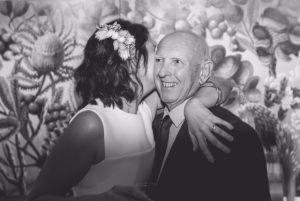 “Two weeks ago my father died of cancer. He had fought for 3 long years – had 18 months in remission, and then was struck down again recently with another form of cancer. In 2012 he was diagnosed with a Birkett’s Lymphoma. We got told that the lymphoma was rare, which was followed with the phrase we treat “600 to 700” a year. To a bystander that doesn’t seem rare.

The reality is, when you stop and think, you realise not a single person goes through life without being impacted by cancer – either through a friend, family or having it themselves. My husband and I also have a dear friend whose son has a rare form of cancer and needs treatments every second week. And another friend has been diagnosed with breast cancer.

I found out my father had relapsed the day after my wedding. That was 16 July 2016. He went into hospital on the 18th. He had a few trips in and out of hospital in the past few months but these times he would end up in ICU. This battle was harder. The treatment had taken its toll on other organs. My father was brave until the end. But his battle is now over and he has found his peace.

It was important to us to have an option for people to support cancer research on our wedding registry. We have everything we need. All we want for our lives and the lives of our friends and family is love, health and happiness. We can do what we can to show love and help with happiness but we need to support research into cancer to get closer to cures – the health bit. In my lifetime I would love to see an end to at least one of the major killers but my selfish reality is that I want to see all of them cured. If 600 to 700 people being affected is rare – I want it to be even rarer! 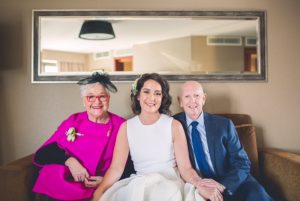 Cancer is awful and it is everywhere. There are really smart people working to end it and to help make life better for those who are suffering from it. Cancer took my father too soon, as a result it is my number one enemy. My husband, my family and I are all committed to doing what we can to support cancer research going forward.

I also want to make a special mention of the amazing nurses who cared for my father at the Mater Hospital in Brisbane. Those men and women never left him alone, they cared for him, they laughed with him, they held his hand and they gave him his dignity. They also cared for us in his final days as we sat with him. There was an unbelievable warmth in the hugs I received from those people. They have a special place in our hearts.

I have included a photo of my dad and I after he gave his speech as well as my mum, dad and I before the wedding (the supporters need to be praised too – mum deals with it 24/7 as well).” – Zoë Robinson, ACRF supporter

Thank you to Zoë for supporting cancer research in lieu of gifts on your special day. With many modern couples accumulating their house-hold goods before they tie the knot, wedding donations to cancer research are becoming an increasingly popular option for both guests and the happy couple. Whether you wish to replace traditional gifts with a wedding donation, or replace a favour in the same way, all funds received by the ACRF in celebration of your wedding will help fund new and better treatments for cancer. Click here to learn more.