Jane, Maxine, and Shea are skydiving for cancer research 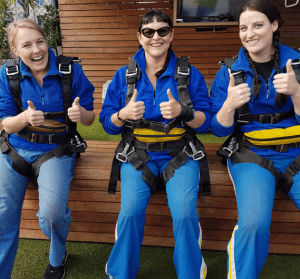 “It was utterly and totally devastating when my older sister died of cervical cancer. We were born three years apart and were always exceptionally close. More often than not, people assumed we were twins, and we had no problem with that! I think she would love that I went skydiving for cancer research.

I became her full-time carer when she was diagnosed with cancer. Sadly, the recently developed cervical cancer vaccination was too late to help prevent my sister’s cancer. This is why I wanted to help researchers speed up discoveries and save lives.

Soon after my sister’s death, I decided I would fundraise for Australian Cancer Research Foundation by going skydiving. Two of my work colleagues, Shea and Jane, put their hands up to jump alongside me. Like me, they do something out of the ordinary every now and again to remind themselves that life is only lived once.

We call ourselves ‘The Gravity Girls,’ but it’s a bit of an in-joke because when we did the jump we were equally excited and petrified at the thought of leaving the plane. After we jumped, strangely enough, we actually wanted to do it again!

I will never stop missing my sister. When I did the big jump, I was thinking of her. I’m proud that I could do something for cancer research and help bring an end to all cancers. I’m confident in the progress researchers are making. I like to think that ending the threat of cancer could happen within my lifetime – what a bonus that would be!” – ACRF support, Maxine

We’d like to thank Jane, Maxine, and Shea for being brave and raising over $6K for ACRF. To show your support for ‘The Gravity Girls’ you can visit their Everyday Hero Page here.