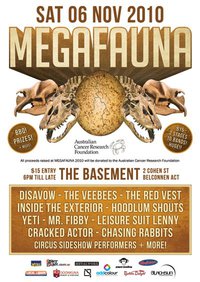 Ten of Canberra’s most talented bands took to the stage recently to entertain crowds at the 2010 Megafauna Charity Music Festival.

With a diverse selection of musical genres including rock, cabaret, metal, and pop, this year’s Megafauna Festival held at The Basement venue in Canberra was a massive success and raised over $3000 for the Australian Cancer Research Foundation (ACRF).

Some of the stand out acts included Canberra five-piece band The Red Vest, and a funk fusion metal performance by three-member band Yeti. Click here to read a review of other bands from the night.

The Megafauna Music Festival is now in its fourth year, and organisers have raised over $16,000 for ACRF so far.

Megafauna is the brain-child of music promotors, Ryan Malcolm and Lachlan Paine, and all proceeds from the event go to ACRF. Ryan has been personally affected by cancer, sadly losing his mother to the disease in 2005.

ACRF wishes to thank Ryan Malcolm and Lachlan Paine, and the entire Megafauna team for the continuing support and congratulate the team on their massive success.

Big thanks also to all the bands that played on the night: Disavow; The Veebees; The Red Vest; Inside The Exterior; Hoodlum Shouts; Yeti; Mr. Fibby; Lei…sure Suit Lenny; Cracked Actor; Chasing Rabbits.

And from the Megafauna team, a special thanks to all of the people that helped set up, helped on the BBQ, the merchandise desk and the door.