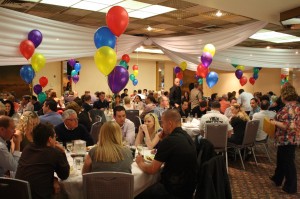 The strong crowd of 130 took control of the auditorium at the Canada Bay Club for a night of fun and frivolity all for a good cause. This was the 3rd annual event, originally created to honour the memory of a much-loved team member Agnes Connell who lost her battle with cancer in August 2009.

Games, raffles, auctions and the all important trivia made for a fantastic night for the staff and their families and friends. A lot of new PepsiCo staff members were also in attendance this year making it the biggest event ever!

Over $14,000 was raised for cancer research on the night and brings the total raised in 3 years up to almost $40,000. A massive effort! This is in addition to the already amazing support the ACRF receives from PepsiCo through their workplace giving, staff fundraising and matched giving programs.

Thank you to Chris, the organising team, all the supporters and PepsiCo for your outstanding generosity to our cause.