Norm “Bugs off” for the very last time. 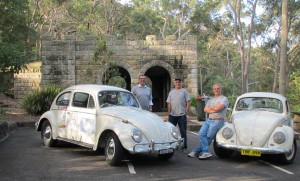 This time Norm and his support team have headed south to Tassy to take in the beautiful scenery of Australia’s apple isle, and for a whirlwind week of fundraising with the locals.

Before leaving home, Norm had already raised over $5,000 for cancer research in Australia and he hopes to reach $10,000 by the end of his journey. If he achieves his target, Norm’s total fundraising efforts will stand at almost $40,000!

Norm started his Bug Off Cancer fundraising mission five years ago when he decided he wanted to do something, anything, to help rid the world of this terrible disease.

Having lost both parents and other relatives to cancer over the years, and knowing others that have this insidious disease, Norm decided to combine his love of VW beetles with a fundraising idea and Bug Off Cancer was created.

As Norm travels back to Sydney we’d like to wish him all the best on this last leg of his journey and send out a massive congratulations for his efforts in fundraising such an incredible amount for cancer research in Australia.

The ACRF is always proud of, and very humbled by, our fundraisers and their dedication to support such a cause. To Norm, we thank you for everything you have done to help the ACRF fight cancer and wish the Bug Off Cancer Beetle a very happy retirement![/vc_column_text][/vc_column][/vc_row]