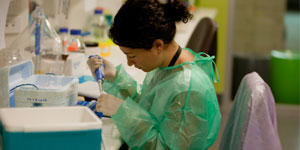 Professor Martin Oehler, Director of the Department of Gynaecological Oncology at Royal Adelaide Hospital, said the past 20 years had seen little improvement in the detection and treatment of ovarian cancer, but there are now many advances in the pipeline and the research community is ‘very positive and hopeful’.

Epithelial ovarian cancer is the most common type of ovarian cancer and develops in the epithelium, which is the surface of the ovary. There are currently no tests effective enough for a population based screening program for ovarian cancer, and symptoms can often be vague making early diagnosis difficult.

International research efforts have been focused on early detection, and although technical limitations had so far prevented the development of a blood test to detect ovarian cancer researchers are now looking to the disease’s immune signature to aid early detection.

Oncologist Dr Anne Hamilton from the ACRF-funded research institute Peter MacCallum Cancer Centre said ‘the building blocks’ were now starting to fall into place and new drug therapies were showing promise. The Australian Ovarian Cancer Study, for which Dr Hamilton is a scientific advisor, is studying the genetic changes leading to the formation of cancers.

Researchers have realised that ovarian cancer is a very heterogeneous disease consisting of distinct subtypes of different origin that vary significantly with regard to molecular biology and clinical behaviour. With this increased knowledge, the hope is for the development of more innovative and targeted treatments.[/vc_column_text][/vc_column][/vc_row]