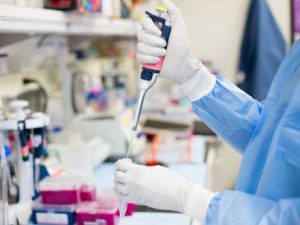 Cancer researchers at Peter MacCallum Cancer Centre in Melbourne have identified a potential pathway for the development of precision medicine, targeting an aggressive form of non-small cell lung cancer, one of the most common types of lung cancer.

In a world-first study published in Science Signalling this month, lead researchers Professor Ygal Haupt and Dr Cristina Gamell have zeroed in on the behaviour of a set of proteins that normally act to suppress the development of tumours.

These proteins were found to be dysfunctional in particularly aggressive cases of non-small cell lung cancer (NSCLC). NSCLC accounts for around 90% of the 10,000 cases of lung cancer diagnosed in Australia each year.

A key step during the onset of most NSCLCs is the loss of the tumour suppressor protein – p16INK4a (p16). In around a third of NSCLC cases, loss of p16 protein is caused by abnormal silencing of the p16 gene through a process called hypermethylation.

Professor Haupt and Dr Gamell’s research has uncovered the intricate chain of events that leads to a loss of function in some of the remaining two-thirds of cases.

“In human DNA, the gene responsible for p16 expression clusters with two other tumour suppressors in a region called the ‘INK4/ARF locus’. Loss of tumour suppressors from this locus is a common feature of many different types of cancer.”

“Our research discovered a distinct group of aggressive NSCLCs, in which the reduction of another protein, called E6AP, triggers an increase of a third protein called Cdc6. This process appears to reduce the expression of tumour suppressors in the INK4/ARF locus.”

“NSCLC patients whose cancers have decreased E6AP and p16, and increased Cdc6, were shown to have particularly poor survival rates.”

“With this insight, we have the opportunity to look at ways of countering the impact of Cdc6 on these cancer-fighting proteins.”

“This knowledge, coupled with the rapidly advancing field of precision medicine, defines new biomarkers and suggests a new pathway for better treatments for this devastating form of cancer in the not too distant future,” according to Professor Haupt.

The research was led by Prof. Ygal Haupt’s Tumour Suppression Laboratory in collaboration with key clinicians from St Vincent’s, the Olivia Newton-John Cancer Research Institute. The study was enabled through funding from the National Health and Medical Research Council.

The original news article was posted on the Peter Mac website.