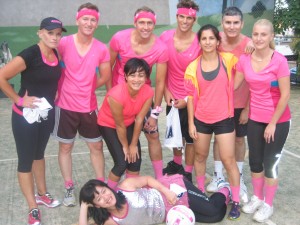 The much-anticipated netball ‘face-off’ between RailCorp and the Novo Rail Netters had everything a spectator could ask for: fierce competition, plenty of goals, a vocal crowd, and a fantastic charitable result, with almost $1500 raised for The Australian Cancer Research Foundation (ACRF).

RailCorp took an early lead in the match and despite a late challenge from Novo Rail, their netball prowess was not enough to claim back victory.

The winner’s trophy was presented to Nazha Dablan, the skipper of the RailCorp team; however the real winner for the night was charity. $1500 was raised through this company fundraising event and is already on its way to ACRF.

Big thanks to the Novo Rail & RailCorp teams and other staff members for supporting cancer research through this fun event!