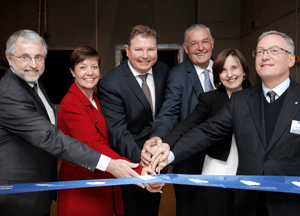 An Australian first and one of four worldwide, the Ingham Institute’s MRI-Linac facility was officially opened on Monday. The facility combines an MRI scanner with a Linear Accelerator for research into cancer therapy and treatment.

Housed in the Ingham Institute’s high-tech research bunker located at Liverpool Hospital in Sydney, the new technology is set to improve the precision and accuracy of radiotherapy.

In 2014, ACRF provided a $2.5 million grant to establish the ACRF Image-X Institute. The MRI-Linac facility is a key part of the new Institute, which aims to revolutionise cancer imaging by creating new and better cancer imaging methods. The new facility pioneers the development of targeted radiotherapy where the x-ray beams are focused on the most aggressive and resistant cancers, increasing survival and reducing the chance of metastases.

Prof Ian Brown FTSE, Chief Executive, Australian Cancer Research Foundation said, “ACRF is dedicated to funding research in Australia that has the power to make significant breakthroughs in cancer diagnosis and treatment. The projects selected by ACRF for research funding are cutting edge and globally competitive.”

“Ingham’s MRI-Linac exemplifies the type of state-of-the-art technology that attracts ACRF’s support and ongoing investment in the pursuit of ways to prevent or more effectively treat cancer.”

Since its inception in 1985, ACRF has awarded more than $25 million in grants to research institutes located in Western Sydney.

Prof Michael Barton OAM, Research Director at the Ingham Institute said, “South Western Sydney is rapidly becoming the world centre of development of this pioneering cancer treatment technology; it is the next generation in cancer treatment as it will improve the effectiveness of cancer treatment for patients in our community, Australia and around the world.”

The facility was officially opened by the Hon. Craig Laundy MP, Assistant Minister for Industry, Innovation and Science and Federal Member for Reid NSW, on behalf of Minister for Health, Greg Hunt MP. The new facility has received support and funding from ACRF as well as the Federal Government.