Michelle faces her fears to honour her brother 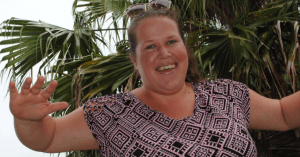 ACRF supporter Michelle Ross will be facing her fear to help end cancer. “Three years ago, my brother Robbie found out that he had cancer at just 27 years old. His doctors found a large tumour in his leg that had to be surgically removed. Although the surgery left him with permanent nerve damage from his ankle down, he had received the all clear.

Unfortunately, his battle was not over. Two years later he began having back troubles and a scan revealed that cancer had returned. This time, it was in his shoulders, his femurs, his lower back and his chest. He fought through a major shoulder replacement which resulted in the loss of almost all movement in his arm. This was followed by months of radiation and chemotherapy treatment.

Last year, just before Christmas, we received the good news that he was again in remission.

Watching my brother go through this had really touched my heart. It was amazing to see all the support the hard working nurses and doctors gave Robbie. So to say thank you, I decided to help raise funds for cancer research.

Robbie has been facing what would be anyone’s worst fear. In honour of his courage, I wanted to attempt to face one of my fears and jump out of a plane at 15,000 feet. I signed up to the Australian Cancer Research Foundation’s JUMP! tandem skydiving program.

Since I’ve signed up, Robbie’s health has worsened. He started having back pain again and after a recent scan, doctors found that the cancer had returned for a third time in the vertebras of his lower back and he’s had to undergo more chemotherapy.

Two weeks ago his legs gave way and he had a fall. The cancer has paralysed him from his belly button down and he can no longer walk.

My family has come together with so much strength and love to support my brother through this hard time. Robbie is now in a wheelchair full-time and my parents have moved in to care for him at his home in Sydney.

I want to help find a cure for families in the future. No one should have to go through what my brother and so many people are going through.

I am so thankful for the amazing fundraising support that I have received from my friends and even strangers. Too many people you talk to in the street, know a family member or friend going through cancer and I hope that one day we end cancer once and for all.” ACRF supporter, Michelle Ross